The Number 1 American Billboard Rock Act Young Guns popped into the studio today to talk about inspiration, touring and what its like to be in a rock band.

Film of the interview coming soon… Watch this space.

For more info on the band and to download their song check out: www.weareyoungguns.com 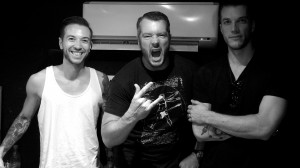