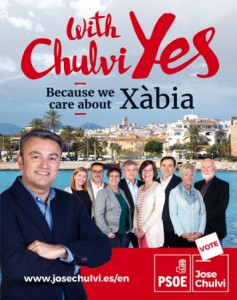 Until four years ago Xàbia Town Hall was as remote and distant as the moon for the citizens of Xàbia. That all changed when I was elected as your mayor. Now the administration is responsive and transparent. Now the Town Hall is for the people. During the past four years the door of my office has always been open to our citizens and this will not change.

We have become known as a strong government which acts with conviction, but is also open to dialogue and consensus. Our work is based on respect for our citizens and sensitivity to issues that affect us every day and impact our quality of life. We promised change, and the first was a change of attitude.

I have shown great respect for our foreign residents and for the great benefit they bring to our community, and have even been learning English to better communicate with them. We opened the OAC (Citizens Help Office) to streamline all Town Hall paperwork and will continue to improve this service, which is now an integral part of the Town Hall. To all the selfless volunteers, who give up their time to teach foreign languages, my warmest thanks. This teaching project will continue to be supported and encouraged.

Today, as mayor, I am much more experienced, and eager to complete what we could not finish during these four years; an example being the Central Cinema which will become a cultural hub for Xàbia Old Town and an exciting reality by the end of 2015.

Another factor that differentiates us from previous Xàbia governments is that in these four years there has not been a single case of scandal or misconduct involving your mayor or our councillors.

As the PSOE government elected in 2011 with the majority support of the residents of Xàbia, we have applied common sense to the concept of growth. This is why we like the expression ‘small urban improvements’. We are convinced that this is right way forward and it has become one of the pillars of our policy as a government.

Under the leadership of the PSOE, we have given meaning and cohesion to government action and have supervised the work in each department. We have used our electoral programme as a guideline for our concept of change and well-being for all.

In these elections the future of our town for the next twenty years is at stake. So I ask you to vote for me, because YOU deserve a Xàbia, with opportunities for everyone, whilst respecting the environment. On May 24th, your vote is needed. VOTE PSOE, VOTE JOSÉ CHULVI; help me return to office as your mayor.

Mayor of Xàbia & Candidate for re-election