UK Prime Minister Boris Johnson hopes in the coming days to strike a deal that takes the UK out of the EU.

Doing so would implement the result of the referendum of June 2016, in which 52% of voters backed Leave and 48% Remain.

But where do voters stand on Brexit now, after more than three years of debate and negotiation?

There is no majority for any course of action

First, no single course of action is preferred by a majority of voters.

For example, polling firm Kantar has asked voters on a number of occasions which of four possible outcomes they prefer.

The most popular choice has been to remain in the EU. However, this secured the support of only about one in three.

The next most popular, leaving without a deal, is preferred by slightly less than a quarter. 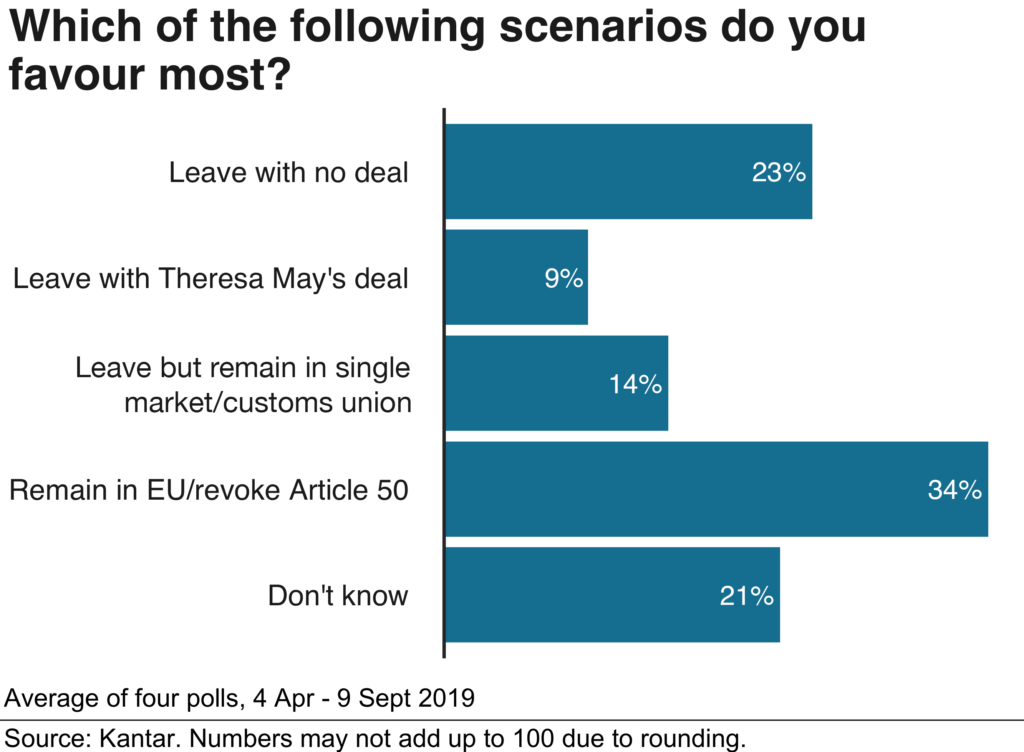 Much the same picture has been painted by another survey. BMG asked people which of five alternatives they would prefer if a deal is not agreed by the end of this month. None has come even close to being backed by more than half of voters.

Should no agreement be reached, the single most popular option is to leave the EU without a deal. Even so, it is still only backed by about one in three.

Both of the next most popular options – holding another referendum and reversing Brexit without a referendum, are only chosen by about one in five. 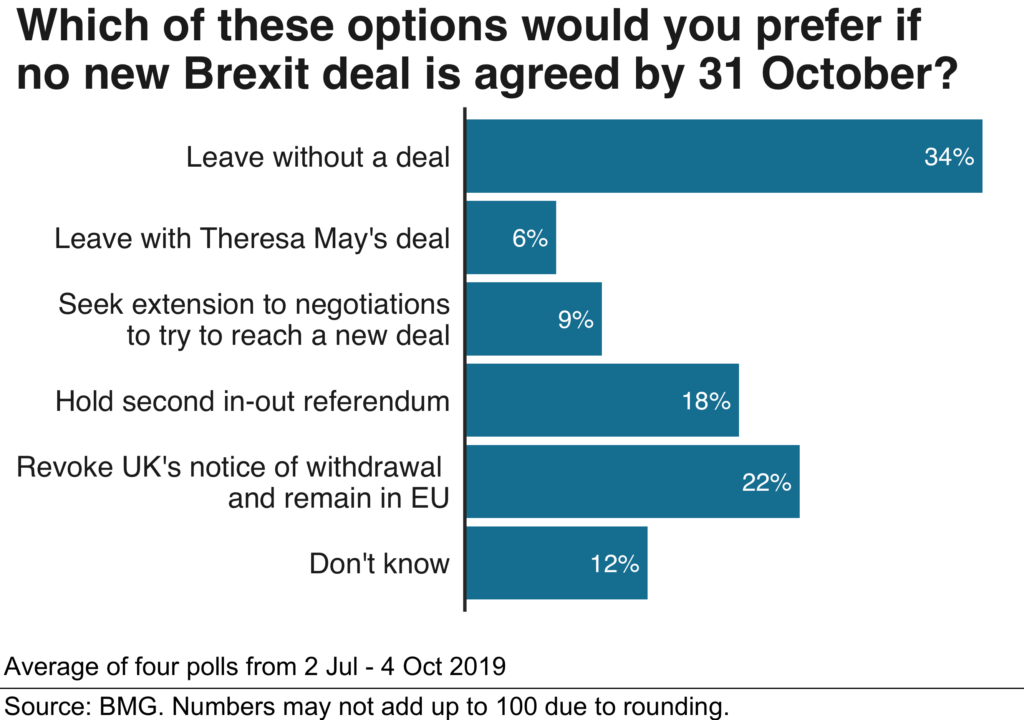 Three polls, by Opinium, Panelbase and ComRes have asked people what they thought of proposals for a deal put forward by Mr Johnson.

All three found that slightly more voters were in favour of them than against. However, they were still backed by well under half.

Most people either said it would neither be good nor bad, or that they did not know.

Against this backdrop, what voters will make of any compromise deal that Mr Johnson might strike with the EU is far from clear.

Second, those who voted Remain and those who backed Leave have very different preferences.

The single most popular option among Leave voters is to exit the EU without a deal. According to Kantar, at least half of them prefer that course of action.

Only about three in 10 pick either of the deals put before them by Kantar: the agreement Mrs May negotiated with the EU, or a “soft” Brexit under which the UK will still be part of the single market and customs union.

Meanwhile, in the event of no deal, on average nearly seven in 10 Leave voters tell BMG they back leaving without one.

In contrast, most of those who voted Remain believe that Brexit should be reversed. On average two in three of them tell Kantar they think Article 50 should be revoked. 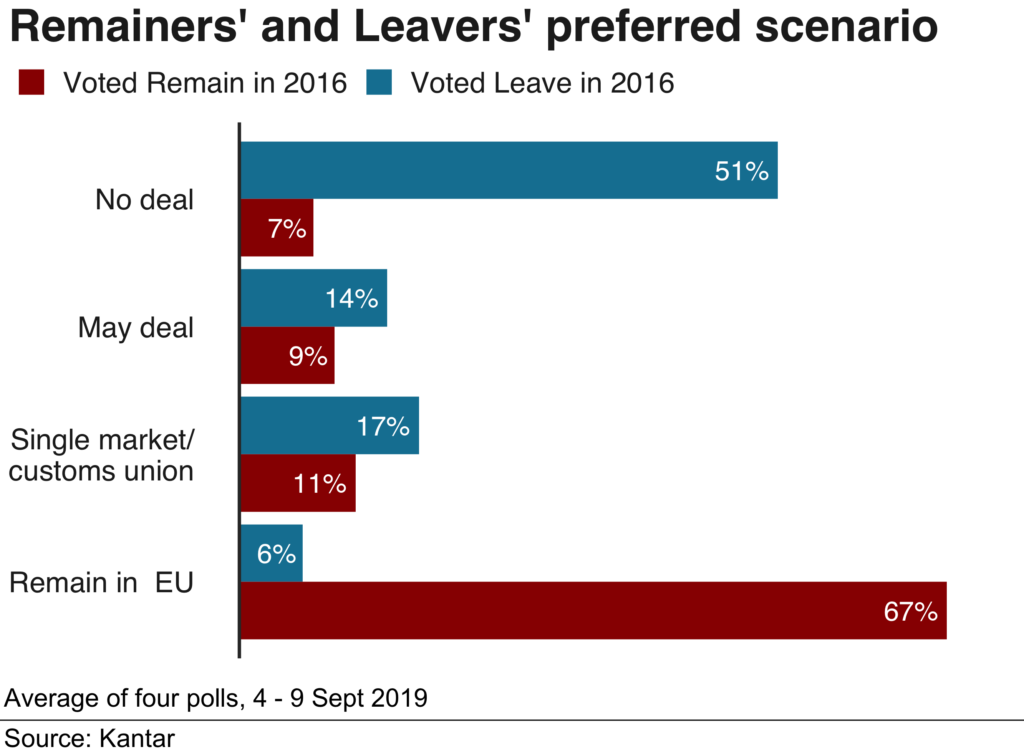 BMG offered its respondents both the possibility of holding another referendum and of reversing Brexit without a ballot.

On average, nearly four in 10 Remain voters say Brexit should simply be reversed, while about three in 10 opt for another vote. 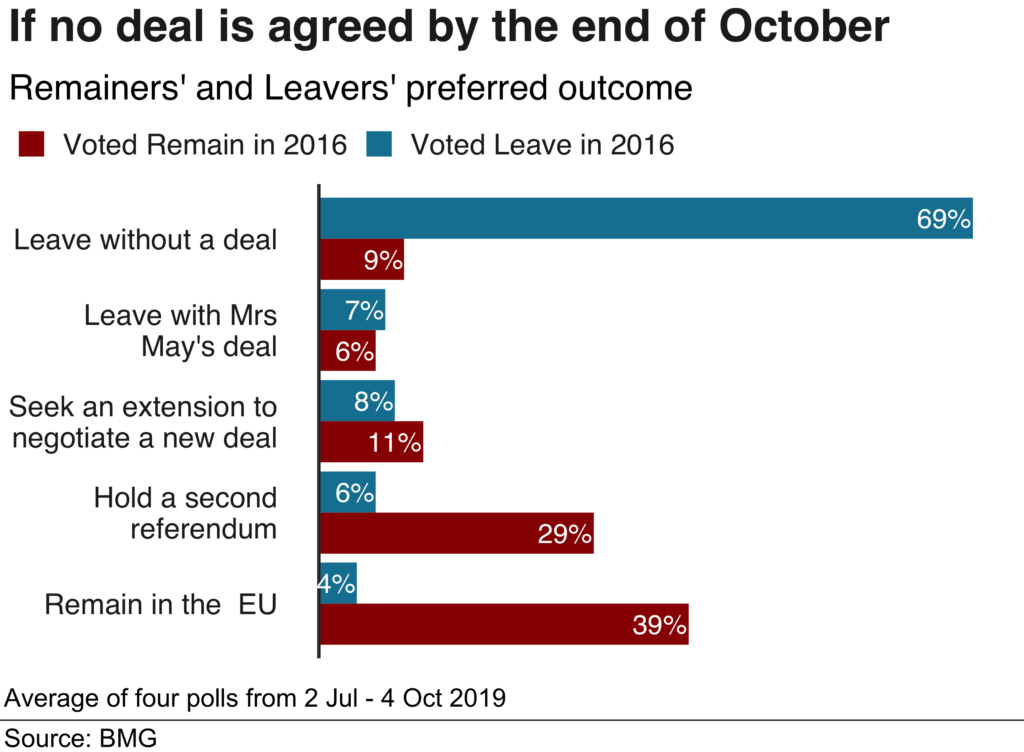 Few voters have changed their minds

Third, very few voters on either side of the argument have changed their minds about whether the UK should leave the EU. The country appears to be just as divided as it was three years ago.

On average, during the last month, polls that ask people how they would vote in another referendum suggest that 88% of those who backed Remain would do so again. Among those who voted Leave, 86% have not changed their minds.

These figures have changed very little during the last two years.

True, most polls suggest – and have done so for some time – that the balance of opinion might be tilted narrowly in favour of remaining a member of the EU. On average, this is by 53% to 47%.

However, this lead for Remain rests primarily on the views expressed by those who did not vote three years ago – and perhaps might not do so again.

In truth, nobody can be sure what would happen if there were to be another referendum.

Voters are split on holding another referendum

Fourth, voters are divided about whether any agreement that might be reached with the EU should be put to a referendum.

The balance of opinion differs from poll to poll.

When people are asked about a “public vote” they are more likely to show support for another ballot than when asked about a “referendum” on the UK’s membership of the EU. 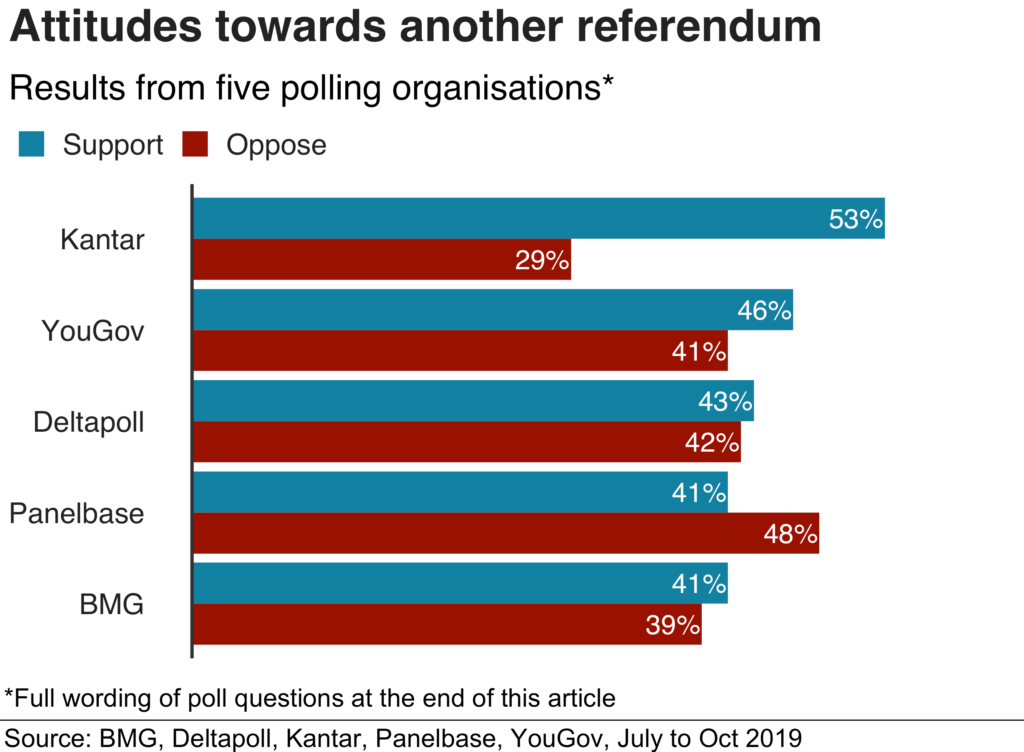 But they all agree that those who voted Remain are much keener on another vote than those who backed Leave.

All five of the polls put support for another ballot among Remain voters at over two-thirds.

In contrast, four of them find that fewer than 20% of Leave supporters are in favour of the idea. The fifth, by Kantar, puts it only somewhat higher, at 37%.

Whatever the outcome this week, the division between Remainers and Leavers does not look as though it is going to be easy to heal.