MPs have backed a bill to hold a general election on 12 December.

It follows the confirmation of a Brexit delay until 31 January 2020 after the EU agreed to the UK’s extension request.

Prime Minister Boris Johnson had previously said the UK would leave by 31 October “do or die”. He has agreed a deal with the EU but the bill implementing it has been put on hold. It will now not progress before the general election. 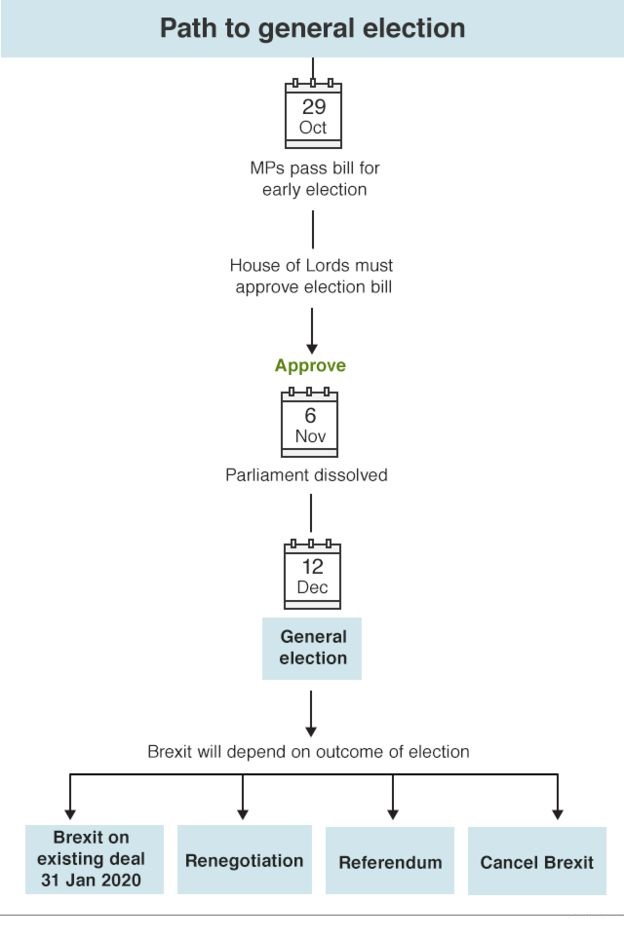 MPs failed to back a motion on 28 October to call an early election – the third time they had done so.

Under the Fixed-term Parliaments Act, two thirds of all MPs – 434 in total – are needed to get an early election using that procedure.

However, on 29 October they backed a short bill to change the Fixed-term Parliaments Act. They rejected a Labour amendment to change the date of the election from 12 December to 9 December.

Only a simple majority was required but the bill still has to go through the House of Lords.

Assuming that happens, without further attempts to change the date, Parliament will be dissolved on 6 November with the election taking place on 12 December.

What happens next on Brexit would depend on the outcome of that election.

One option is to implement the Brexit deal that Boris Johnson has negotiated with the EU.

A new version of the Withdrawal Agreement Bill would have to be introduced in the new Parliament – and go back to the beginning of its passage through Parliament.

The aim would be to get the bill completed in time for Brexit on 31 January. This is the Conservatives’ plan.

There could also be another referendum although it would certainly require a further Brexit delay.

Labour, the SNP, The Independent Group for Change, Plaid Cymru and the Green Party all support having another referendum.

The default position will be that if no deal is passed by Parliament, the UK will leave the EU without one on 31 January 2020.

The Brexit Party wants the UK to leave the EU without a deal, in what it calls a “clean-break Brexit”.

The Liberal Democrats have said that if they won a majority in the House of Commons they would revoke Article 50 and cancel Brexit. If they didn’t get a majority, they would support another referendum.