Business owners, schools and retailers in Barcelona are on high alert ahead of the Spanish government’s planned Cabinet meeting in Casa Llotja de Mar in the city on Friday, which is expected to attract mass protests and cause havoc in the Catalan capital.

The pro-independence protest group Committee for the Defense of the Republic (CDR) has promised to bring the city to a standstill with large-scale protests and road blockades.

Spain’s train service Renfe and postal workers have also called a strike on Friday, while the pro-independence union Intersindical-CSC has asked all workers to down tools for two hours.

University students are expected to join the protests with both Together for the Republic (Unis x la República) and Catalan Student Union (Sindicat d’Estudiants del Paisos Catalans) calling on students not to attend classes.

The Catalan regional police force, the Mossos d’Esquadra, decided on Tuesday to postpone their planned strike until after the Spanish Cabinet meeting out of a sense of “responsibility.” More than 9,000 law enforcement officers will be on duty in Catalonia to safeguard public security on the day.

Given the expected disruptions, many are taking preventive measures to minimize the impact of the strikes and blockades.

Education authorities in the Catalan districts Vallès and Maresme have asked the Department of Education to move forward some activities to Thursday in case students have trouble making it to class. In Barcelona, some centers have decided to hand back student grades on Thursday for this same reason. According to the Department of Education, schools must remain open on Friday, the last school day of the quarter, but they do have the freedom to reorganize set activities. 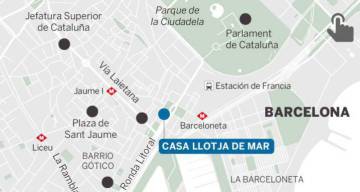 The Cabinet meeting will be held in Casa Llotja de Mar.

Barcelona University and the Autonomous University of Barcelona maintain that Friday will be a normal day but Pompeu Fabra University, which is mid-exams, has asked to rescheduled tests planned for Friday.

Meanwhile, businesses from all sectors are taking measures to reduce the effect of potential traffic problems as a result of the protests on work, such as allowing people to work from home, cancelling or postponing scheduled meetings and moving forward business activities.

Even shared motorbike applications, which allow users to rent electric motorbikes across the city, have limited their parking area to ensure they are not left in areas where there will be protests.

Concern over disruptions is already having an impact on hotels near the airport. After the CDR announced it would block access to the Barcelona-El Prat airport, many rooms have remained vacant on Friday, even though they are at full occupancy on Thursday.

Shopkeepers were the first to raise their concerns over the protests. In a press release, published last week, retailer associations pointed out that last year’s pro-independence demonstrations caused sales to fall between 5% and 30%.

“We recommend opening as normal, but we are worried because it is one of the most profitable weekends of the year. We understand that there’s no reason why it will be anything more than road blockades, but with these things you know how they are going start but you don’t know how they are going to end,” explained Salva Vendrell, president of the retailer foundation Barcelona Comerç.

The transport sector is also worried about the effect of the disruptions. Sources from Mercabarna, a food wholesale market in Barcelona, say that the business outlook for Friday is worse than other days.

“Mercabarna is not going to close, but it is true that, given what our main wholesalers have told us, there will be less work,” said sources.

Adolfo Martínez, secretary general of the Catalan Transport Association, says that transportation companies have not been given any specific instructions on what to do on Friday. “The idea is to avoid, if they can, working on that day, or moving forward or pushing back work, given what could happen,” he explained.

What are the protests about?

The decision of Spanish Prime Minister Pedro Sánchez of the governing Socialist Party (PSOE) to hold a Cabinet meeting in Barcelona has angered many pro-independence groups, who see the move as a “provocation.” The date coincides with the first anniversary of the December 21 regional elections, which were called by the central government of then-Popular Party (PP) Prime Minister Mariano Rajoy after the region’s powers were suspended under Article 155 of the Constitution.

Protesters are also calling for Catalan independence leaders to be released from prison, where they are in pre-trial detention for their involvement in last year’s unauthorized referendum and subsequent unilateral declaration of independence. Four of the nine independence leaders awaiting trial in the Supreme Court are on a hunger strike to protest the Constitutional Court for “blocking” their appeals in order to prevent them from getting their cases to the European justice system.