Prime Minister Boris Johnson and his Irish counterpart Leo Varadkar agree they can “see a pathway to a possible deal” after talks, Downing Street says.

The leaders spoke for over two hours, including a one-to-one discussion during a walk in the grounds of Thornton Manor in north-west England.

On Wednesday, EU leaders accused the UK of proposing untested ideas, adding that progress had been limited.

A crunch EU summit next week on 17 and 18 October is seen as the last chance for the UK and EU to agree a deal ahead of 31 October deadline.

After the meeting, Mr Varadkar told reporters the talks were at a “very sensitive stage” but were “very positive and very promising”.

He said he was now “convinced” the UK wants an agreement, saying: “I do see a pathway towards an agreement in the coming weeks.”

However, issues remain over “consent and democracy” and ensuring there is no customs border, Mr Varadkar said.

The Brexit proposals from Mr Johnson include a provision for the consent of Northern Ireland’s politicians to be sought every four years – meaning the arrangement could, in theory, continue indefinitely.

“It remains our position that there can’t be a hard border between north and south,” Mr Varadkar added.

“No one’s cracking open the champagne… don’t even pour a pint of warm Guinness,” joked one of the few people familiar with what actually happened on Thursday after talks between Boris Johnson and Leo Varadkar.

Nothing that happened in the privacy of a country house wedding venue on the Wirral means there will be a deal with the EU in the next seven days.

Nothing has made the obstacles in the way of reaching an agreement magically disappear.

But something has changed today.

After days of various EU players publicly scorning the UK’s proposals, explaining the objections and lamenting the weaknesses, there is a tangible willingness, on the bloc’s side at least, to see seriously if they can work.

We’ve discussed here so many times why Ireland’s attitude matters so much, so the very public positivity from Mr Varadkar – his “maybe”, instead of “no” to Mr Johnson’s proposals – is extremely important.

There is hardly any detail out there of the compromises or concessions that might be actually in play to make a deal work.

Don’t give too much credence to even the best informed speculation that’s already whirring online as to how it could happen.

A joint statement said the prime minister and Taoiseach (Irish leader) had a “detailed and constructive discussion”.

“Both continue to believe that a deal is in everybody’s interest,” the statement said. “They agreed that they could see a pathway to a possible deal.”

The talks concentrated on “the challenges of customs and consent”, Downing Street said.

“They agreed to reflect further on their discussions and that officials would continue to engage intensively on them.”

Cabinet minister Michael Gove, who has responsibility for the UK’s no-deal preparations, said: “I have to prepare for every eventuality but I’m hopeful following the good conversation that they had that we can make good progress in the days ahead.”

He said the “mood music and developments are really, really positive”

What are the PM’s border plans?

The prime minister has insisted the UK will leave the EU with or without a deal at the end of the month.

That is despite the so-called Benn Act – passed by MPs last month – demanding he request a delay to the Article 50 deadline from the EU until January 2020 if a deal has not been agreed before 19 October.

On Wednesday, Business Secretary Andrea Leadsom suggested the PM was gearing up to bypass legal obstacles to a no-deal Brexit by sending one letter requesting an extension and, in the same instance, submitting a second memo telling European leaders he does not want one.

Asked on ITV’s Peston programme whether the idea of sending two letters to the EU was a possible loophole, Ms Leadsom replied: “Absolutely.”

In a speech in Northampton, Labour leader Jeremy Corbyn reiterated that his party would agree to a general election as soon as no-deal has been taken “off the table”, as the PM “can’t be trusted not to break the law”.

He also accused Mr Johnson of “using the Queen” to deliver a “pre-election Tory party political broadcast” at next week’s state opening of Parliament.

He told party supporters that the government had “no obvious means” of getting new laws passed, and holding a Queen’s Speech before an election was a “cynical stunt.”

Saturday 19 October – Special sitting of Parliament and the date by which the PM must ask the EU for another delay to Brexit under the Benn Act, if no Brexit deal has been approved by Parliament and they have not agreed to the UK leaving with no-deal. 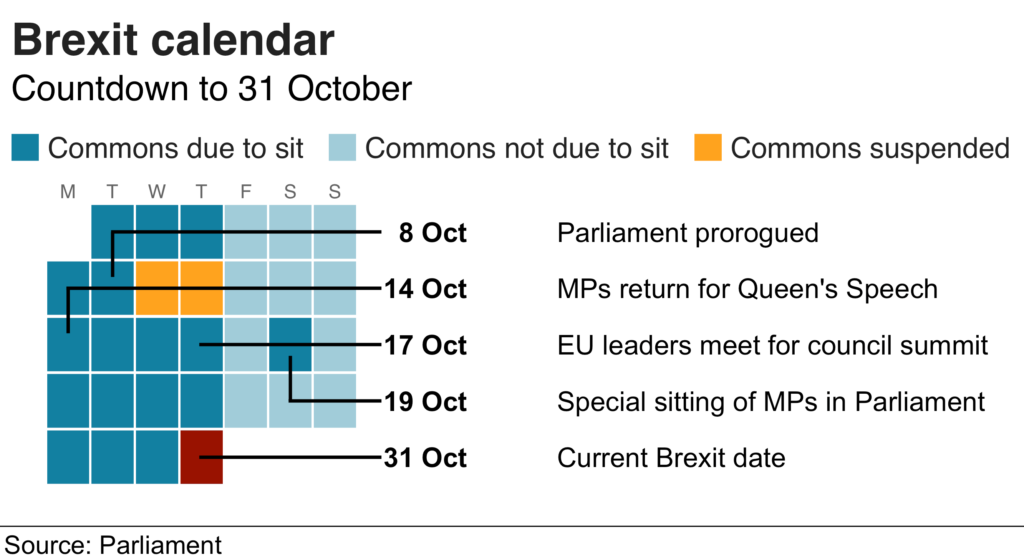