Even a “relatively benign” no-deal Brexit would push UK debt to its highest since the 1960s, the Institute for Fiscal Studies (IFS) has said.

The think tank said borrowing was likely to rise to £100bn and total debt would soar to 90% of national income.

The Treasury said any decisions would be made “with a view to the long-term sustainability of the public finances”.

The gloomy forecasts are part of the IFS Green Budget, looking at the challenges facing Chancellor Sajid Javid as he prepares for his first Budget.

The IFS’s Mr Johnson said: “Given the extraordinary level of uncertainty and risks facing the economy and public finances, it [the government] should not be looking to offer further permanent overall tax giveaways in any forthcoming Budget.

“In the case of a no-deal Brexit, though, it should be implementing carefully targeted and temporary tax cuts and spending increases where it can effectively support the economy.” 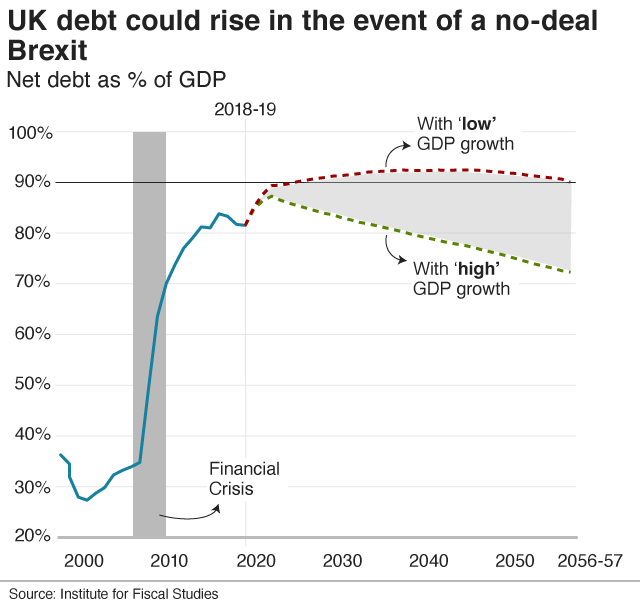 But even before the cost of a possible no-deal Brexit is factored in, the think tank said the government was set to break its own spending rules.

The IFS forecasts that annual borrowing – the difference between what the government spends and what it receives through, for example, taxation – will top £50bn next year.

The think tank said the government’s current plans for day-to-day spending next year are closer to the levels proposed by Labour’s 2017 manifesto than plans laid out by the Conservative party at the time.

An HM Treasury spokesperson said: “September’s spending round supported the people’s priorities of health, education and the police within the existing fiscal rules, as we said it would be.

“Beyond that, the chancellor has already said that we will be reviewing the fiscal framework as we turn the page on austerity. In so doing, we will retain a fiscal anchor to public spending so that decisions are taken with a view to the long-term sustainability of the public finances.”

A doubling in the annual budget deficit, leading, in relation to the size of the economy, to the highest government debt since the 1960s.

These are the new forecasts of the independent Institute for Fiscal Studies for how a no-deal Brexit is likely to drench the UK’s public finances in red ink. Only on the extraordinary scale of the fiscal collapse of the 2008 financial crisis are these numbers modest.

On any ordinary scale they do matter – an annual deficit heading back up towards £100bn, and national debt closer to 90% of GDP for the first time in half a century.

And all this comes at a time where the institute concludes that the government is no longer taking its own fiscal rules seriously, borrowing more to spend more on public services even as the Treasury approaches its self-imposed limits.

In the case of a no-deal Brexit, the IFS said a temporary government spending spree could help to smooth the path for growth, although it would also add to government debt.

The think tank forecasts that the debt stock – the total amount of money owed by the government – would climb to almost 90% of national income. It currently stands at about 80%.

Even with “substantial” government spending, the IFS expects the UK economy to flatline for two years following a no-deal Brexit.

It warned that a rise in public spending in 2020 would likely be followed by “another bust” as the government would have to deal with “the consequences of a smaller economy and higher debt for funding public services”.

Mr Johnson said that it would be “crucial” that government spending programmes were temporary.

“An economy that turns out smaller than expected can, in the long run, support less public spending than expected, not more,” he said.

Christian Schulz, the chief UK economist at Citi, which contributed to the report, said: “The UK economy is already around £60bn smaller than it would have been without a vote to leave the European Union, with the UK missing out on a bout of global growth.

“Business investment is up to 20% lower than it would otherwise have been, hurting productivity and wage growth,” he said.

However, Mr Schulz added that a further Brexit delay would create more uncertainty, denting investment and leaving growth at around 1% a year.

“From a growth perspective, a Brexit deal is a little better, leaving growth at 1.5%, but it would leave no chance of Brexit being cancelled,” he said.

“A no-deal Brexit – even with a substantial stimulus – could mean no growth at all for the next two years. Remaining in the EU would be the best scenario for economic growth in the next few years.”