Parliament will be suspended just days after MPs return to work in September – and only a few weeks before the Brexit deadline.

Boris Johnson said a Queen’s Speech would take place after the suspension, on 14 October, to outline his “very exciting agenda”.

But it means the time MPs have to pass laws to stop a no-deal Brexit on 31 October would be cut.

House of Commons Speaker John Bercow said it was a “constitutional outrage”.

The Speaker, who does not traditionally comment on political announcements, continued: “However it is dressed up, it is blindingly obvious that the purpose of [suspending Parliament] now would be to stop [MPs] debating Brexit and performing its duty in shaping a course for the country.”

Labour leader Jeremy Corbyn said: “Suspending Parliament is not acceptable, it is not on. What the prime minister is doing is a smash and grab on our democracy to force through a no deal,” he said.

He said when MPs return to the Commons next Tuesday, “the first thing we’ll do is attempt legislation to prevent what [the PM] is doing”, followed by a vote of no confidence “at some point”.

Hundreds of protesters gathered in Westminster on Wednesday evening chanting “stop the coup” and carrying anti-Brexit placards and EU flags.

The demonstration, which was organised hours beforehand, started outside Parliament before spreading towards Downing Street.

At the scene, BBC correspondent Richard Galpin described the atmosphere as peaceful and lively.

He said “good-natured” protesters on College Green broke through barriers which had been in place to separate live TV crews from members of the public – before traffic on Parliament Square was blocked by some people who sat down in the road.

Several protesters he spoke to indicated this was only the beginning of the disruption, with more demonstrations being organised for the weekend.

Three Conservative members of the Queen’s Privy Council took the request to suspend Parliament to the monarch’s Scottish residence in Balmoral on Wednesday morning on behalf of the prime minister.

It has now been approved, allowing the government to suspend Parliament no earlier than Monday 9 September and no later than Thursday 12 September, until Monday 14 October.

Leader of the House Jacob Rees-Mogg, who was at the meeting with the Queen, said the move was a “completely proper constitutional procedure.”

Earlier, Mr Johnson said suggestions the suspension was motivated by a desire to force through a no deal were “completely untrue”.

He said he did not want to wait until after Brexit “before getting on with our plans to take this country forward”, and insisted there would still be “ample time” for MPs to debate the UK’s departure.

“We need new legislation. We’ve got to be bringing forward new and important bills and that’s why we are going to have a Queen’s Speech,” Mr Johnson added.

Shutting down Parliament – known as prorogation – happens after the prime minister advises the Queen to do it.

The decision to do it now is highly controversial because opponents say it would stop MPs being able to play their full democratic part in the Brexit process.

A number of high profile figures, including former Prime Minister John Major, have threatened to go to the courts to stop it, and a legal challenge led by the SNP’s justice spokeswoman, Joanna Cherry, is already working its way through the Scottish courts.

After the announcement, Sir John said he had “no doubt” Mr Johnson’s motive was to “bypass a sovereign Parliament that opposes his policy on Brexit”, and he would continue to seek legal advice. 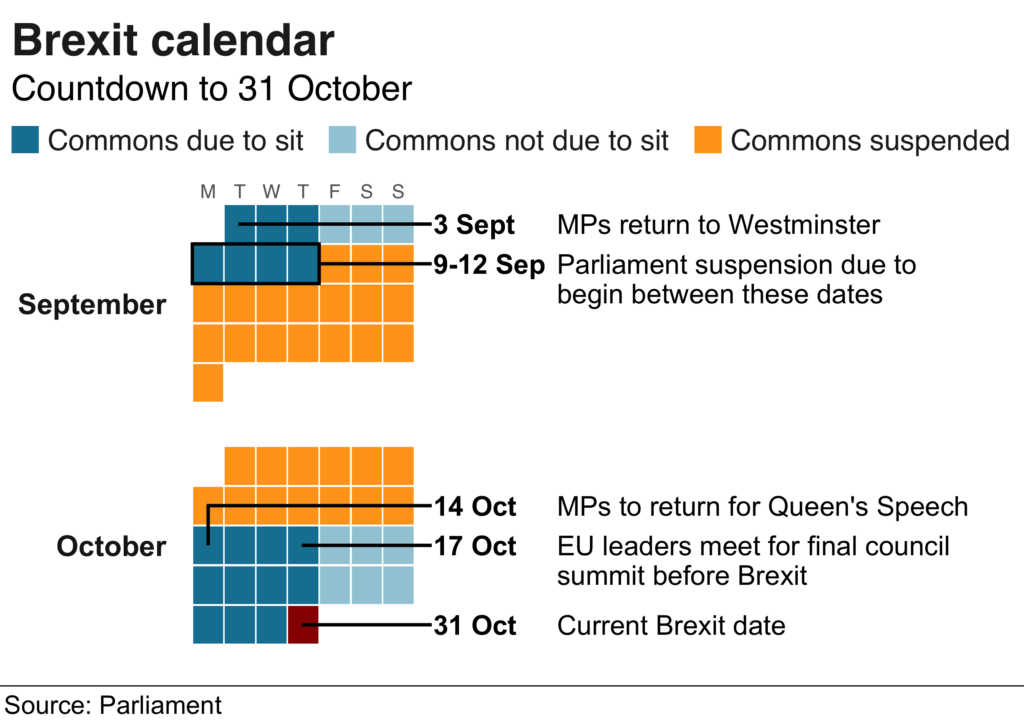 He said it was “Her Majesty’s Government” in name only and it was her role to take the advice of her ministers, so she would prorogue Parliament if asked to.

It is not possible to mount a legal challenge to the Queen’s exercise of her personal prerogative powers.

But anti-Brexit campaigner Gina Miller – who previously won a legal battle against ministers over Article 50 – has made a judicial review application to the courts about Mr Johnson’s decision.

She told the BBC’s Clive Coleman: “If the intention of using this prorogation – and the effect – is that it limits Parliament sovereignty, then we believe that’s illegal and unconstitutional.”

This has been an extraordinarily long Parliamentary session, and governments have the right to shut up shop and return to announce their proposals in a new one, with all the golden carriages, fancy Westminster costumes, banging of doors and splendour that goes with it.

But that new timetable means Parliament will be suspended for longer than had been expected – it’s only a matter of days, but those are days that might matter enormously.

Boris Johnson secured his place in No 10 by promising he’d do whatever it takes to leave the EU at Halloween, so this decisive and intensely risky plan will satisfy many of those who backed him.

But some others in his government are worried – moving now, even with the accompanying controversy, he sets the stage and the terms for an epic fight with MPs on all sides.

The PM says he wants to leave the EU on 31 October with a deal, but it is “do or die” and he is willing to leave without one rather than miss the deadline.

That position has prompted a number of opposition MPs to come together to try to block a possible no deal, and on Tuesday they announced that they intended to use parliamentary process to do so.

But with Parliament set to be suspended, opponents have only a few days next week to push for their changes.

Senior Tory backbencher and former attorney general Dominic Grieve said the move by Mr Johnson could lead to a vote of no confidence – something opposition parties have left on the table as another option to stop no deal.

“There is plenty of time to do that if necessary [and] I will certainly vote to bring down a Conservative government that persists in a course of action which is so unconstitutional,” he said.

Scotland’s First Minister Nicola Sturgeon said MPs must come together to stop the plan next week, or “today will go down in history as a dark one indeed for UK democracy”.

Mr Johnson has written to MPs to outline his plan, adding: “There will be a significant Brexit legislative programme to get through but that should be no excuse for a lack of ambition!”

He mentioned the NHS, tackling crime, infrastructure investment and the cost of living as important issues.

He also called on Parliament to show “unity and resolve” in the run up to the 31 October so the government “stands a chance of securing a new deal” with the EU.

But a senior EU source told the BBC’s Brussels correspondent Adam Fleming the bloc’s position was clear and was not contingent on the machinations of the UK Parliament.

There has been considerable anger at Mr Johnson’s move from across the political spectrum.

The leader of the Liberal Democrats, Jo Swinson, said it was a “dangerous and unacceptable course of action”.

“He knows the people would not choose a no deal and that elected representatives wouldn’t allow it. He is trying to stifle their voices,” she said.

The leader of the SNP in Westminster, Ian Blackford, accused Mr Johnson of “acting like a dictator”, while First Minister of Wales Mark Drakeford said he wanted to “close the doors” on democracy.

Others, though, have defended the plan.

Conservative Party Chairman James Cleverly said setting out a legislative programme via a Queen’s Speech was what “all new governments do”.

US President Donald Trump tweeted his support for Mr Johnson, saying it “would be very hard” for Mr Corbyn to seek a no-confidence vote against the PM, “especially in light of the fact that Boris is exactly what the UK has been looking for”.

Brexit Party MEP Alex Phillips said MPs “only had themselves to blame” for the move.

She told BBC News: “They have made themselves the obstacle in front of delivering the referendum result. Boris Johnson is saying he now needs to remove that obstacle, and quite right too.”

The leader of the DUP, Arlene Foster, also welcomed the decision to suspend Parliament and have a Queen’s Speech, but said the terms of her party’s confidence and supply agreement with the Conservatives would now be reviewed.

“This will be an opportunity to ensure our priorities align with those of the government,” she added.

Prorogation in a nutshell

Parliament is normally suspended – or prorogued – for a short period before a new session begins. It is done by the Queen, on the advice of the prime minister.

Parliamentary sessions normally last a year, but the current one has been going on for more than two years – ever since the June 2017 election.

When Parliament is prorogued, no debates and votes are held – and most laws that haven’t completed their passage through Parliament die a death.

This is different to “dissolving” Parliament – where all MPs give up their seats to campaign in a general election.

The last two times Parliament was suspended for a Queen’s Speech that was not after a general election the closures lasted for four and 13 working days respectively.

If this prorogation happens as expected, it will see Parliament closed for 23 working days.

MPs have to approve recess dates, but they cannot block prorogation.