The launch of the RBL Poppy Appeal 2019 will take place in Benidorm on Friday 18 October in the
presence of the mayor, and long-time supporter of the RBL, Sr Jose Pérez.
He will be accompanied by Ms Kate Green, Overseas Team Lead of the RBL Worldwide, British
Consul, Ms Sara-Jane Morris, and both Capt Jonathan Beaney RM and Cdr Ed Dunn RN, who will be
representing the Defence Attaché in Madrid.
Two other regulars at the head of the parade will be Wayne Campbell and Skippy Teasdale, from the
Royal Hospital in Chelsea. The pair have been attending the launch for the last four or five years and
will be easily recognisable in their bright scarlet coats. They will no doubt once again be the star
attraction, certainly in terms of photo opportunities, so don’t be shy. I am sure that they will be
delighted to oblige.
Here in District North, Spain, the RBL Poppy Appeal will be aiming to exceed the 2018 total of
176,000 euro, monies that will enable the Legion to continue its vital work in delivering life-long
support to Service and ex-Service personnel and their families here in Spain, through hardships,
injuries and bereavements.
Every euro received in Spain will be used in Spain where it will make a real difference, not only to the
lives of Service men and women and veterans that live amongst us, but to their families as well, who
can also experience difficulties dealing with the circumstances of a loved one who is serving or who
has served.
So make your donation and wear your poppy with pride in the knowledge that you will be
supporting your local Armed Forces community, past and present, who have done so and who will
continue to provide an incredible service to our country.
The launch will be preceded by a short parade from Calle Castellon along Paseo de Levante to Rincon
de Loix, Benidorm. It gets underway at 12 noon and will be led by the Torrevieja Pipes and Drums,
along with standard bearers from across the many branches that make up Spain District North.
Do go along and show your support to our veterans on the day. Your attendance will be extremely
welcome.

For further information please contact: Kevin Reardon, Media Officer, RBL Spain, District North.
Email: orihuelacosta.chairman@rbl.community
The Royal British Legion’s work is the nation’s biggest Armed Forces charity providing care and
support to all members of the British Armed Forces past and present and their families. The Legion
champions Remembrance and safeguards the Military Covenant between the nation and its Armed
Forces. It is well known for the annual Poppy Appeal, and its emblem the red
poppy.www.britishlegion.org.uk 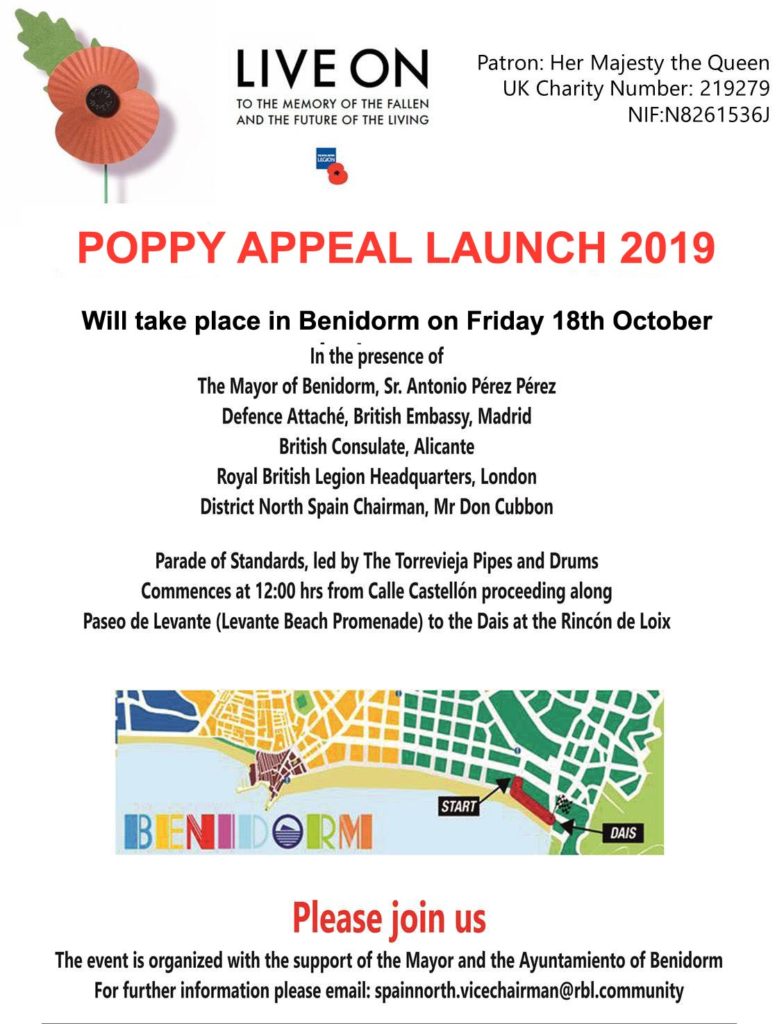