The UK is a discontented and divided nation, the latest Sky Data tracker poll reveals as the country appears close to a Brexit deal.

Our poll was conducted in the week before the government announced a new deal with the EU, which could yet reward the Conservatives with a bump in support that they would surely look to cash in on at a general election.

After three years of Brexit negotiations, and a decade of austerity combined with sluggish wage growth, the British public is in a disgruntled and unforgiving mood.

It is fairly satisfied with the job Boris Johnson is doing as PM – with 46% of people satisfied and 49% dissatisfied, a net rating of -3%.

This is a considerable improvement on his predecessor Theresa May, who this time last year had a net rating of -31%. 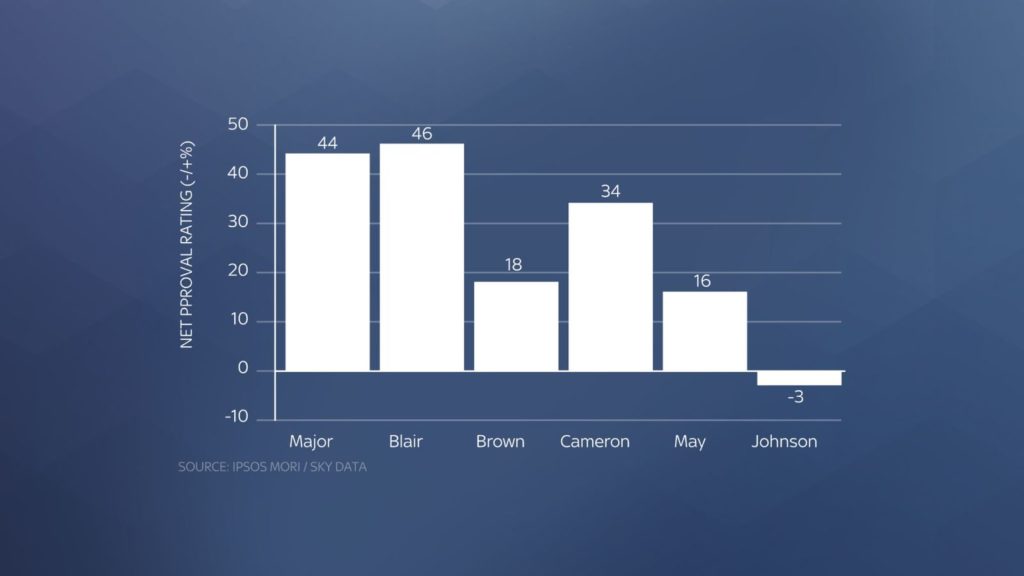 Mr Johnson’s popularity might climb higher if he can secure the parliamentary backing for a deal that eluded Mrs May.

Mr Johnson’s ratings are better than those of his opponents. Satisfaction with Jeremy Corbyn as leader of the Labour Party has declined steadily since the 2017 election, with his net rating of -55% among the worst of any Labour or Conservative leader since 1945 (only Michael Foot, Margaret Thatcher and John Major have polled worse).

Jo Swinson has not enjoyed much of a honeymoon with the public as leader of the Liberal Democrats, with half saying they are dissatisfied with her performance and just under a quarter being satisfied (a net rating of -27%).

This is surprising given that the party has gained support in the polls since the European Parliament elections in May.

By comparison, the month before the party won more than 20% of the national vote in May 2010, then leader Nick Clegg had an approval rating of +53%. It is striking that none of the party leaders are viewed particularly fondly by the public.

The parties are also perceived to be deeply split, with 73% of people saying the Conservatives are divided and 68% saying the same of Labour.

This is hardly surprising given the Conservatives recently expelled 21 rebel MPs over Brexit and leading figures such as Rory Stewart and Amber Rudd have resigned from the party, while the latest episode in Labour Party infighting was the failed attempt to abolish the deputy leader position held by Tom Watson.

What is unusual in historical terms is that both parties are seen as so divided at the same time. 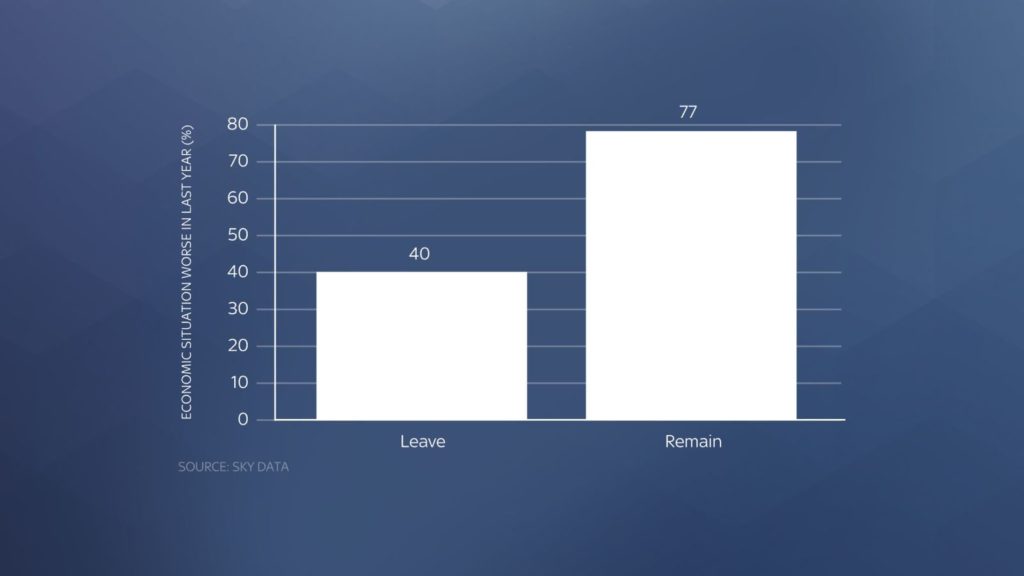 To investigate public antipathy towards politics and politicians, we asked how much people trusted the parliament at Westminster. Some 69% expressed distrust.

This is more than 20 points higher than when the British Election Study asked people the same question in 2010, not long after the parliamentary expenses scandal (at the time thought to be a low point in trust in parliament).

To our surprise, the level of distrust in the EU is slightly lower than in Westminster, with 59% of people expressing distrust.

These results primarily reflect differences between Leave and Remain voters in their attitudes towards the EU. Both groups are similarly distrustful of Westminster, whereas 55% of Leave voters expressed no trust in the EU, compared to just 11% of Remain voters.

Brexit has been a plague on both your houses for the Leave and Remain-backing politicians in parliament.

We also asked whether elected politicians should avoid heated or aggressive language because it could encourage some people to take violent action. Sixty per cent of people supported this view.

While Remain voters were more likely to object to heated or aggressive language (with 77% support), a plurality of Leave voters did too (by 49% to 43%). Despite the division that characterises much of our politics today, there is support across the board for responsibility and moderation in the rhetoric used by politicians.

In this Sky Data poll we have introduced a series of new tracker questions that have been asked by other pollsters in Britain (some dating back to the 1940s).

These address topics such as public approval of the government’s record and how people think the economy has done in the past year. This will enable us to compare public opinion today to other significant moments in British politics.

Disapproval of the government’s record to date currently stands at 62%, reflecting the national mood of discontent.

However, this is much higher (80%) among Remainers and 2017 Labour voters.

Our figures suggest the economic mood of the nation is also pessimistic. Nearly three in five people think that the national economy has grown worse over the last 12 months.

A similar proportion thinks it will get worse in the year ahead. However, these figures obscure the separate realities inhabited by Leavers and Remainers.

Nearly four in five Remain voters say that the economic situation in the country has got worse over the last 12 months. This is close to the level of economic pessimism experienced at the time of the 1992 ERM crisis and more severe than that during the Winter of Discontent in 1978/9.

While Remain voters perceive an economy in dire straits, Leave voters are rather more bullish – with just two in five saying things have worsened in the past year.

These bubbles extend to people’s perceptions of their own financial situation, with around half of Remainers saying they will get worse off over the next year, compared to around one in five Leave voters.

Brexit is colouring our perceptions of economic reality. How long this will last is difficult to say.

We will continue to monitor these developments in Sky Data polling in the months ahead.