The Pets In Spain animal charity has no bounds when it comes to rescuing animals, and it’s not just dogs and cats. A new born lamb, goats, rabbits, birds, hamsters, tortoises, pigs, and an Iguana! 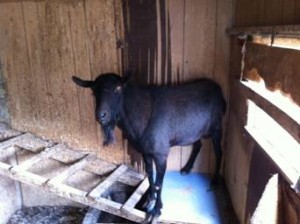 Billy the goat was the pet of a lady and he lived in a big trailer on her plot of land. When his owner died suddenly Billy was stranded on the 20,000 sq meter plot. The local authorities knew he was there and without an owner but they did not respond to pleas from friends of the deceased lady for help in relocating him. There was also the real possibility that once word spread that he was unaccompanied the place would be invaded and he would be ruthlessly killed for food. This is where the Pets In Spain animal charity stepped in. They received a call from the local vet clinic and responded immediately. Taking it in shifts to go to the location of the goat several times each day,to oversee his safety and to feed him, the volunteers were eventually able to effect his rescue by trapping him and removing him from danger. Even better news is that Billy (now renamed Rasta) is re-homed with a young English family on a finca where he has a goat friend for the first time in his life.

In Spain there is no organisation like the RSPCA in the UK. Every day the Pets In Spain team receive calls from people asking for help with animals in imminent life threatening situations. Once a rescue is initiated the animal is assured of total care and welfare and readied for adoption, but the charity’s activities are limited due to lack of funding. Their biggest expenditure each month being the ever increasing veterinary bills.

Having sufficient funds available is vital for the charity so that they can save more animals in distress. The Pets In Spain charity is appealing for people to help raise funds by organising a fund raising event in their locality. Unwanted household items can be donated to be sold to raise funds for the charity, these can either be delivered to their charity corner in the Veterpet veterinary clinic on the N332 at La Marina, next to Mercadona supermarket, or by calling 645 469 253. For donations by PayPal, credit card, or bank transfer, please visit the donations page on the charity’s web site. Collection tins and pamphlets are also available from the charity. The Pets In Spain animal charity is organised and operated entirely by volunteers. All proceeds from fund raising and donations go to help the animals. Updates on all the animals rescued are on the charity’s Facebook page: petsin.spain1