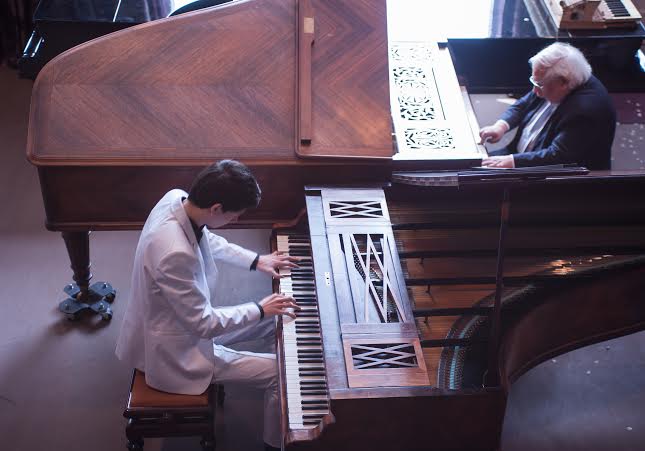 22, 23 & 24 April will be very special for classical music lovers in the Costa Blanca. Wayenberg & Oei, will perform in Villa El Nido on one stage, together on 2 grand pianos playing two complete Piano Concertos (2nd Rachmaninov and 2nd Chopin) in one concert.

They also play quatre-mains and solo!! The world-famous pianist Daniël Wayenberg (86) made his international breakthrough in 1949 and is considered one of the best pianists ever from the Netherlands. In his long career, Daniel played with the New York Philharmonic Orchestra and many times with the Royal Concertgebouw Orchestra Amsterdam. Wayenberg and Martin Oei played together many concerts in sold out venues, as in the Concertgebouw in Amsterdam. Also featured are both regularly on television. Martin Oei (20) started playing the piano at a young age from his tenth first time at the Young Musicians Academy Fontys Conservatory and from 2013 studying at the conservatory. At age 18, Martin had already recorded three CDs and (reconstructed by musicologist Cees Nieuwenhuizen) a world premiere at the “Beethoven Festival” in Bonn with the first performance of Beethoven’s FantasiaSonata. Won several awards (among others Pr. Christina Concours). Wayenberg and Oei have been working together for several years and enjoy playing quatre mains, also in the presence of the Dutch Queen Maxima.

Dutch master pianist Wayenberg and Martin Oei did a successful Costa Blanca concert tour in December 2014 performing in Alicante, Benidorm, Dénia and Jávea, after which the organizer Momentos de Música was overwhelmed with positive reactions. Wayenberg and Oei agreed to come back in April for a serie of intimate concerts exclusively at “Villa El Nido” in Jávea.

The venue facilitates up to 50 guests indoors, however with good weather there is room for 75 guests in the garden. The shielded patio area near the pool provides a spacious setting to meet one another, including of course the talent. The house and garden concerts in ”Villa El Nido” provide a stage for high-quality classical music and international musicians. The concert are characterized by a cozy and relaxed atmosphere where guest have a chance to meet & greet with the musicians and mingle as during intermission and after the concert. The concert feel like a day out; being served welcome drinks and a freshly prepared 5-course menu and open bar, everything is included in the concert ticket price. There seem to be quite some people enjoying the concept as Momentos de Música organized 10 concerts in Villa El Nido in 2015, most sold out.

Don’t miss out on this special day and visit www.momentosdemusica.es for more info and ticket ordering. If you are interested in more concerts of Momentos de Música, please go to this website and sign in with your e-mailadress.