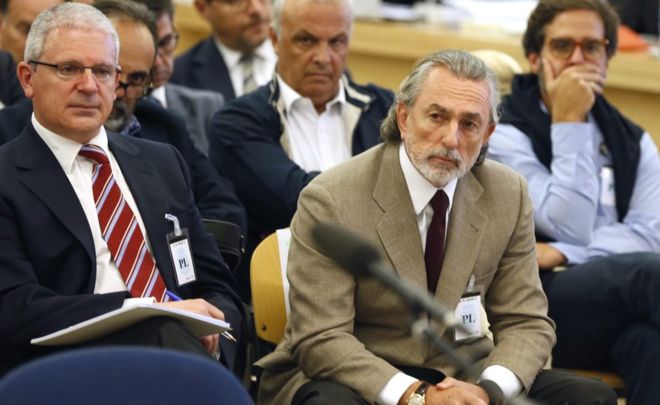 Thirty-seven people, including leading members of Spain’s ruling Popular Party, have gone on trial in Madrid accused of involvement in a massive corruption network.

Three former PP treasurers are among the defendants in Spain’s biggest corruption trial for years.

Businessman Francisco Correa is alleged to have been the ringleader who handed out bribes in exchange for contracts.

The suspects were heckled as they arrived at the national court.

Francisco Correa, who faces up to 125 years if found guilty, has already spent three years in custody and his arrival was greeted with cries of “corre, corre” (run, run). He went by the nickname “Don Vito”, after the main character in the film The Godfather.

The so-called Gurtel case has electrified Spain for years, since it was exposed by a civil servant in a Madrid suburb and the case taken on by renowned investigating judge Baltasar Garzon.

Ex-civil servant Ana Garrido played a key role in exposing the alleged corruption network linked to Spain’s ruling Popular Party (PP). And her life has been ruined by doing so.

Almost a decade ago she found that under the area’s Popular Party mayor, a network of firms was being favoured without due process. Then she realised the dimensions of a scandal that spread far wider than her leafy area of Madrid.

Ms Garrido’s evidence ended up in the hands of investigating judge Baltasar Garzon. But her treatment at work led to clinical depression and, eventually, giving up her civil service career.

“There is nothing like a whistle-blowers’ charter in Spain. Not only are we not protected, but we can be persecuted and harassed by those we accuse of abusing power.”

Judge Garzon was later taken off the case but not before allegations emerged of a network of companies linked to Mr Correa being handed contracts in return for payments.

Other defendants include long-standing ex-PP treasurer Luis Barcenas, who has also admitted running a slush fund from Switzerland and channelling cash donations to party officials.

Health minister Ana Mato resigned from her job when her husband was linked to the network. Although her husband is among the defendants, she escaped criminal charges.

Although the case has for years been of great embarrassment for caretaker Prime Minister Mariano Rajoy, he has not himself come under investigation.

As the Gurtel trial got under way in Madrid’s national court, another political corruption case was playing out in the next-door courtroom.

Ex-IMF head Rodrigo Rato, who went on trial with 64 other bankers late last month, was a leading figure in Mr Rajoy’s PP.

He denied doing anything wrong, in the face of allegations that luxury purchases were racked up with “unofficial” credit cards, in the years before the bank had to be bailed out with public money.