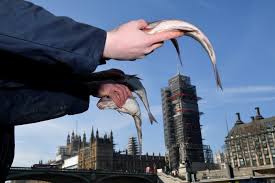 Protesters have thrown dead fish into the Thames outside Parliament as they oppose the Brexit transition deal.

The fishing industry and many coastal MPs are unhappy that the UK will not regain control of the country’s fishing waters on Brexit day, 29 March 2019.

Instead it will be subject to EU rules for 21 months until December 2020.

Michael Gove has said he shares the “disappointment” but urged people to keep their “eyes on the prize” of getting full control of UK waters back.

In a sign of government unease about the reaction, Theresa May met MPs with fishing ports in their seats on Tuesday in an attempt to explain their approach.

Speaking from the fishing trawler, former UKIP leader Nigel Farage told Sky News the government did not have the “guts” to stand up to the EU.

“I don’t think this government has got the guts or the strength to stand up and take back our territorial waters.”

Conservative backbencher Ross Thomson, who is MP for Aberdeen South, said he was “really disappointed” fishing communities will not regain control of UK waters as soon as it leaves the 27-nation bloc.

Speaking from the fishing trawler, he said: “Literally within seconds of our leaving (the EU), we’re handing all of that back.”

Mr Thomson, who was among the delegation of MPs to see Mrs May, said that while it was a “productive” meeting, “we were very, very clear that we’ll only support an end deal if it delivers for our fishing communities – and we have been absolutely clear that this is a red line for us”.

Mrs May is hoping the deal will be signed off at a meeting of leaders at the European Council summit in Brussels this week, clearing the way for crucial talks on post-Brexit trade to begin in earnest.

But 14 MPs, including leading backbench Brexiteer Jacob Rees-Mogg, said the proposal for Britain effectively to remain in the EU’s Common Fisheries Policy for almost two years after Brexit day in March 2019, with no say over the allocation of quotas, would not command the support of the Commons.

“These demands are completely unacceptable and would be rejected by the House of Commons,” they said.

Speaking from the quayside in Westminster, Mr Rees-Mogg said the EU “desperately needs our money” so the negotiating strength was with the UK.