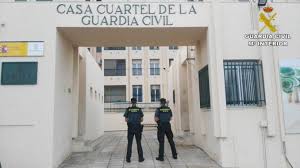 Two intruders dressed as Guardia Civil officers from Spain managed to get into Carles Puigdemont’s rented house in Waterloo, Belgium, according to police in the northern European country.

Authorities caught the two men and ordered them to remove their fake uniforms and leave the complex.

They are said to have travelled there in a hired car.

Both are members of the group Spanish Democracy and Unity (D.U.E.) and have uploaded photos on social media of their yellow rental car draped in the Spanish flag, with one of them holding a defaced Catalunya regional flag and a giant ’emoji’ mask of a frowning face with its tongue out.

Another photograph by the group shows one of the men in his bogus Guardia Civil uniform and the caption: “Ready to catch the slippery fugitive Puigdemont!”

Puigdemont was not at home at the time, since he has been in Geneva, Switzerland since the weekend taking part in various human rights-related events at an international conference.

His next stop, without returning to Belgium, will be Finland, where he has been invited by the group Friends of Catalunya to give a conference at the University of Helsinki on the situation in his home region.

The deposed president of Catalunya met up with fellow exiled politician Anna Gabriel whilst in Switzerland.

Spain’s prosecution service is calling for Puigdemont’s and Gabriel’s passports to be ‘invalidated’, preventing them from travelling around Europe explaining their side of the story.