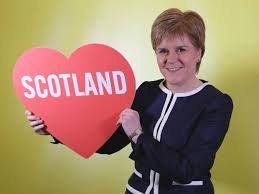 A row over controversial Brexit legislation drawn up by Scottish ministers could be dragged into the Supreme Court after members at Holyrood overwhelmingly backed the bill.

MSPs voted 95 to 31 in favour of the bill which looks to side-step Westminster’s ‘power grab’ of devolved powers as they return from Brussels after Brexit if no deal can be struck between the Scottish and UK parliaments.

However the move has been challenged by Tories’ constitution spokesman Adam Tomkins, who said either the country’s Lord Advocate should refer it to the highest court in the land, or UK ministers, who have 28 days to do so.

Scotland’s Brexit Minister Mike Russell argued that both he and Nicola Sturgeon hoped that a deal on devolved powers could be struck between Westminster and the devolved administrations, but that the new bill would be a powerful bargaining chip in future negotiations.

Mr Russell said current proposals in Westminster’s EU Withdrawal bill were “obviously incompatible” with the Welsh and Scottish devolution settlements, and that no administration “worth its salt” would accept the deal in its current form.

“Today starts a new chapter in this story. The Scottish and Welsh parliaments will be armed with an alternative to the way in which the United Kingdom government wishes to treat devolution. We will not go naked into the negotiating chamber any longer,” he said.

“We have an ability to negotiate based on an alternative which we have put in place ourselves. We can and we will make this Bill work if we have to.

“So now the ball is firmly in Westminster’s court. If they want to come to the table and discuss these issues – and I hope they do – they know we have the alternative. “

But the emergency legislation, which has been fast-tracked through the Scottish Parliament, has already been challenged by Holyrood’s Presiding Officer, who took the historic decision to rule that the bill fell outside the competence of the parliament.

Mr Tomkins said the Lord Advocate, Mr Wolffe, should have the “courage of his legal convictions” in challenging the bill under powers granted to him.

He said: “The only place which can authoritatively rule on the legality of this legislation is the United Kingdom Supreme Court.”

Fellow Scottish Tory MSP Donald Cameron said that the bill was of “dubious legality” and that MSPs would be damaging devolution if they voted for the “wretched, reckless and lamentable legislation”.

A spokesperson for the Scottish Office said: “Our focus continues to be on finding an agreed way forward with the devolved administrations on the EU Withdrawal Bill.

“Everyone agrees this is the preferred option. As with all Scottish Parliament bills, the competence of the Continuity Bill will be considered by the Law Officers.”