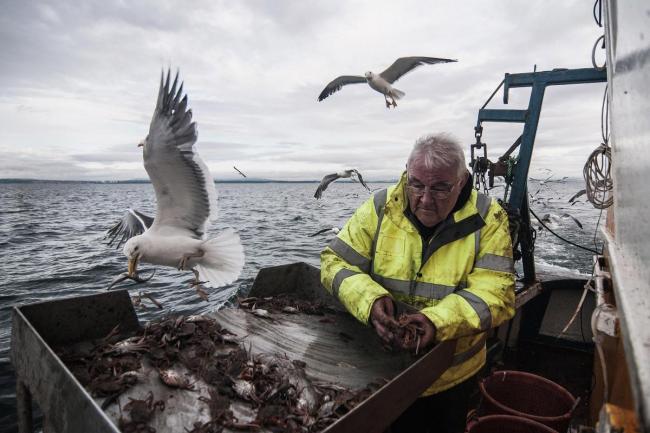 A furious Scottish fisherman warned that Britain’s Brexit team will “never be forgiven” if they allow the European Union to remain in control of UK waters after Brexit.

Brexit Secretary David Davis secured a deal for the UK’s fishing fleet on Monday in which Britain will remain trapped in the EU’s Common Fisheries Policy (CFP) until December 2020.
UK fishermen were infuriated by this concession after being promised they would finally have control of their waters after Brexit.

Following the news of the transition deal, Jimmy Buchan of Amity Fish Company told reporters: “This is too big an opportunity to let go. If they do, they will never be forgiven.

“They will go down in history as the people who have failed a nation.”

British fishermen believe UK waters are overfished by other EU countries and the Common Fisheries Policy (CFP) means they are also restricted as to how much they can fish.

The strict EU regulations mean that some British fishermen are forced to throw their catch back into the sea, including haddock which is thriving in British seas.

Britain currently exports 80 percent of its stock, with the majority going to the EU.

In protest against Britain securing a Brexit transition deal with the EU, Leave campaign group Fishing for Leave organised a vessel to travel along the River Thames on Wednesday as they hurled out four boxes of haddock into the river.

Fishing for Leave campaigner Aaron Brown said the boat set off to protest against the “death sentence” transition deal.

The campaign group’s spokesman Alan Hastings also said: “This is a death sentence for what is left of the EU fleet because the EU will enforce detrimental legislation, especially the discard ban, to cull the EU fleet and then claim the resources we can’t catch anymore as their own.

“The EU has every incentive to wipe us out in 21 months and they will be ruthless enough to do it. And our lot have put us in this position.”

Brexiteer Nigel Farage joined the fishermen on the vessel to symbolically throw fish into the River Thames in protest against the “disaster” transition deal.

Danish fisherman Carl Jasper Hermansen claimed it was unlikely the UK will regain control of its waters after Brexit.

Mr Hermansen said that if Denmark were in the same situation then they would want control of their waters.

He said: “I also believe that even though that the Scottish and the British fishermen are saying that we want our stocks back.

“Of course, I think that other countries would do that. Denmark would also do that if we were in the same situation.

“But I don’t believe that at the end of the day that this is going to happen because it turns everything upside down.”