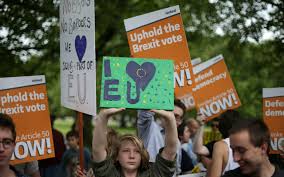 The Lib Dems have claimed their call for a referendum on the final Brexit deal is supported by eight liberal European prime ministers.

They said liberal leaders meeting in Brussels had backed a statement supporting the Lib Dem call for the British public to have “the final say”.

Lib Dem leader Sir Vince Cable had met members of the liberal ALDE group on the margins of the European Council.

But the ALDE group later tweeted that “no statement had been agreed upon”.

A Liberal Democrat press release said the statement had been made by the prime ministers of:

It reads: “We regret Brexit, but acknowledge the choice made by British voters for the UK government to negotiate withdrawal.

“We further acknowledge and support the Liberal Democrats’ call for the British people to have the final say on the Brexit deal.

“All parties need to seek a broad deal accommodating both the position of the UK government and the principles on which the European Union is built.”

Sir Vince, who was attending his first meeting with the group, described it as a “clear signal from our European friends that they want us to remain in the European Union and would welcome an exit from Brexit with open arms”.

His party, which has 12 MPs at Westminster, is campaigning for a referendum on the terms of any final Brexit deal.

But the ALDE group, which organised the lunch meeting, tweeted: “Pertaining to the Lib Dem press release issued today on Brexit: at the ALDE leaders meeting of 22 March no statement has been agreed upon or released.”

Lib Dem sources suggested there had been a verbal agreement, although it had not been formally signed.

And Dutch Prime Minister Mark Rutte appeared alongside Sir Vince and said: : “If some way or another, the UK would decide to change its position, it would be highly welcomed by every liberal leader and, my impression is, almost everybody in the EU.

“Whether that happens will be up to the UK itself and UK politicians.”

In a later statement, ALDE said: “As a matter of fact: Vince Cable did attend the liberal leaders’ meeting and they showed support for the Lib Dems – but no statement has been issued or agreed.”

“But we won’t be having a second referendum. We will be delivering on the will of the British people.”