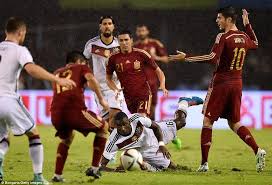 Spain are one of the “top favourites” to win this year’s World Cup in Russia, according to Joachim Low, manager of defending champions Germany.

Four-time winners Germany face Spain, whose sole World Cup win came in 2010, in a friendly in Dusseldorf on Friday.

Germany won all 10 of their qualifiers for this summer’s tournament, while Spain had nine wins and a draw.

“It will be a game in which both teams will want to show what they can do,” said Low.

“However, neither will want to lay their cards on the table. If we were to play Spain at the World Cup, it would be a very different game and we know they are a top team in every respect.

“Their best 11 to 13 players come from Atletico Madrid, Barcelona and Real Madrid, uniting all these virtues. You have Atletico’s pressing game, Real’s high speed and quick counter-attack with Barca’s possession.

“That unites the national team and, for me, they are one of the top favourites.”

World Cup winners Jerome Boateng, Mats Hummels and Thomas Muller – all of whom play for Bayern Munich, Mesut Ozil of Arsenal and Real Madrid midfielder Toni Kroos will all start on Friday.

Borussia Dortmund’s Marco Reus misses out with a groin problem and team-mate Mario Gotze, who scored the winning goal in the 2014 World Cup final, is also unavailable.

Atletico Madrid striker Diego Costa has been recalled to the side for the first time since June 2016.

The two teams face further high-profile friendlies on Tuesday, with Germany taking on Brazil in Berlin and Spain hosting Argentina in Madrid.

The Germans boast the better head-to-head record, winning nine of their 22 games against Spain (drawn six, lost seven). Kroos scored the only goal in the teams’ most recent encounter in November 2014.

The two sides last faced each other competitively in the semi-finals of the 2010 World Cup, with Carles Puyol’s second-half goal earning the eventual tournament winners a 1-0 victory.

Germany, who are top of Fifa’s world rankings, are on a 21-match unbeaten run.

They won all 10 games in reaching the 2018 World Cup, becoming only the second team after Spain in 2010 to achieve a 100% qualifying record.

Germany scored 43 goals in total, breaking the record for the most goals scored in a tournament qualification campaign (set by Spain before Euro 2000).

Bayern right-back Joshua Kimmich set up more goals (nine) than any other player during European qualifying.