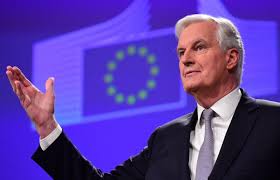 Michel Barnier kicked off a day of Brexit and trade discussions at the EU summit by refusing to talk to the press in English as he set out his latest negotiation threats.

The European Commission’s chief Brexit negotiator said Britain must “respect the principles” of the EU as he kicks off further discussions on the future relationship between Britain and the bloc.

The Frenchman had already summoned Prime Minister Theresa May for a bizarre greeting before making his way to the waiting press pack.

Keen to speak about Brexit, Mr Barnier, however, told journalists he would be speaking in French, despite questions arriving in English.

After a short chuckle, he added: “This is a decisive stage in these difficult negotiations.

“The Council will confirm the transition call and then set the framework for our future relationship with the United Kingdom.

“This future partnership will have to respect the principles and the identity of the EU.”

Mrs May had already answered two questions on her way to the summit.

Declaring herself “pleased” the US had announced overnight a temporary exemption for the EU from Donald Trump’s steel tariffs.

On Brexit, she said the transition is likely to be agreed today and she was “looking for a new dynamic in the next stage of negotiations”.