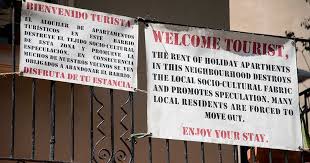 Spain has been hit by a number of anti-tourism demonstrations and marches due to the increasing number of tourists visiting the country. Two campaign groups have warned that more are to hit the country this summer.

Spain is one of the most popular travel destinations for British travellers, reporting 75.3 million overseas visitors in 2017.

With increasing tourist numbers, it means many cities are increasing accommodation and tour operators in a bid to keep up.

This has been met with anger by locals who feel they are being pushed out and has resulted in anti-tourism marches and demonstrations across Spain.

Two campaign groups have threatened to increase their protests this summer when Britons will be flocking to the region.

The Balearic islands – home to Ibiza and Mallorca – saw a number of protests against tourists, as well as in Barcelona and Madrid.

Tourists buses had eggs thrown at them whilst flares were set off in Palma last year.

However, the groups maintain that they are not “anti-tourism”, but against the excess of tourism.

They cite that locals face problems of overcrowding, littering and anti-social behaviour in the peak months of the summer.

It is also pricing out locals as a number of apartments are being rented out for tourists at a much higher cost.

Over 3,000 people took to the streets in Majorca in a backlash against Britons, with banners reading “Tourists Go Home”.

Another 30 protesters also stormed a hotel in Barcelona.

As anti-tourist protests  reached a high in 2017, Italy also faced the same with Venice marches protesting the high number of visitors and cruise ships docking into the small city.

The popular Spanish islands have enforced a number of new laws in the recent year to clamp down on boozy tourists.

This includes drinking in the streets and being partially naked.

Tourism is an integral part of Spain, with tourists from the UK helping the country rake in £6.4 billion last summer.