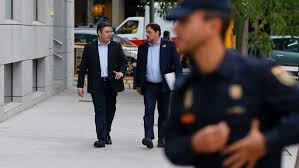 A Spanish Supreme Court judge on Friday said he would try 13 Catalan separatist leaders for rebellion, a crime punishable by up to 25 years in jail, after they enabled Catalonia’s banned independence drive last year.

In total, 25 separatist politicians will be tried for rebellion, embezzlement or disobedience, the judge said in a court ruling.

The judge also requested that 14 members of the previous Catalan regional administration deposit 2.1 million euros ($2.59 million) in a bank account to pay back the money used to hold an illegal referendum on independence on October 1 and cover judicial costs.

The court did not give a date for the trial.