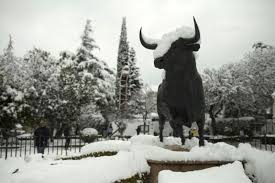 The 15.5 million car journeys that will take place in the next 10 days could be complicated this weekend by the arrival of the “Hugo” depression.

Ahead of Easter next week, today will see the first big exodus of cars from Spanish cities, with the DGT traffic authority expecting a total of 15.5 million journeys to be taken from 3pm today until Monday April 2, a 2% rise on last year.

As well as the usual traffic jams on the roads out of Spain’s cities, drivers can also expect complications from a cold weather front that has been christened Hugo. Strong winds and rain showers are forecast across the peninsula and to a lesser extent in the Balearic Islands, with snow expected in the northwest.

A total of 26 provinces in the regions of Andalusia, Cantabria, Castilla-La Mancha, Castilla y León, Catalonia, Madrid, Valencia, Extremadura, Galicia, the Balearics, the Basque Country and Asturias, as well as the North African Spanish city of Melilla, are on alert for heavy seas, strong winds and snow. All the alerts are so far yellow or orange, the first and second, respectively, of a three-step scale.
On Saturday alerts are expected in 47 provinces, with red levels likely. Cantabria, A Coruña, Lugo and Asturias, for example, will be on red alert due to heavy winds.

Almería, A Coruña, Lugo and Asturias are on orange alert due to heavy seas, while there are yellow alerts in Cádiz, Granada, Málaga, Cantabria, Melilla, Pontevedra, Menorca, Vizcaya and Gipuzkoa. Waves as high as nine meters are expected on the coasts of Galicia, Asturias and Cantabria.

Strong or very strong winds will blow in this afternoon in Galicia and Asturias, and will spread to most of the peninsula during Saturday. In some areas wind speed could whip up as high as 120km/h, putting them on hurricane levels.

The rain is expected to fall this afternoon in Galicia, quickly spreading to the rest of the peninsula and the Balearic Islands. Snowfall, meanwhile, will be strongest in the northwest in areas above 800 meters of altitude, with as much as 20 centimeters expected in parts.

For the thousands of tourists and locals who will be turning out next week to see the Easter processions across Spain there is good news, however, given that the spell of bad weather should have passed by Saturday night.