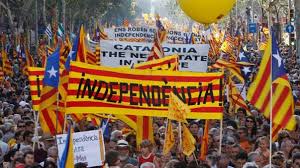 Catalonia’s ex-leader Carles Puigdemont has been detained by German police acting on a European arrest warrant.

Mr Puigdemont, who is wanted in Spain for sedition and rebellion, was held crossing from Denmark on the way to Belgium, his lawyer said.

Mr Puigdemont will appear before a German judge on Monday.

The ex-leader’s supporters gathered in Barcelona to protest against his arrest. The charges he faces in Spain could result in 30 years in prison.

Mr Puigdemont has been living in self-imposed exile in Belgium since Catalonia’s parliament unilaterally declared independence from Spain in October.

He was visiting Finland last week when the arrest warrant against him was reissued, and he slipped out of the country on Friday before Finnish authorities could arrest him.

He is spending the night in a prison in the north German town of Neumuenster.

His court appearance on Monday will be a formality to confirm his identity. Afterwards a decision will be made about whether he will remain in custody while the extradition order is being processed.

German police said that Mr Puigdemont was detained by a highway patrol in the northern state of Schleswig-Holstein, which borders Denmark.

After the news of his arrest broke on Sunday, thousands of demonstrators poured on to the streets of Barcelona.