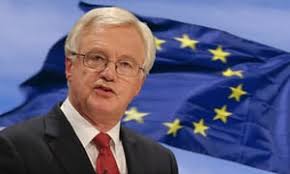 It is “incredibly probable” that the UK will reach a final deal with the EU, the Brexit secretary says.

David Davis defended planning for a stalemate, saying it was like having home insurance when “you don’t expect your house to burn down”.

He also hit back at Tory Eurosceptic concerns about what has been agreed so far.

But speaking on BBC One’s Andrew Marr Show, Mr Davis said the UK had succeeded in getting a transition deal for the period after March 2019 and moving talks onto trade, adding: “So I don’t think Jacob’s got a point.”

He insisted a solution could be found to avoid introducing physical border checks on the border between Northern Ireland and the Republic of Ireland, saying a “whole lot of technology” was available to achieve this.

And challenged on the EU’s controversial “backstop” proposal of Northern Ireland effectively remaining in the customs union, he said the “overwhelmingly likely option” was a free trade and customs agreement which would make finding a solution to the border question “much, much easier”.

Mr Davis said the progress made in talks with Brussels meant it was now “incredibly probable, very, very highly probable” that there would be a final deal.

But he said “you can never stop making arrangements” for a potential no-deal scenario, “because that’s one of the things that guarantees the deal”.

“You don’t expect your house to burn down, it’s less than a one in 100,000 chance, but you have house insurance anyway,” he said.

Mr Davis predicted the deal would be nothing like the current arrangements between the EU and Norway. Theresa May has already ruled out this model, which gives Norway access to the single market while accepting EU laws and free movement and making annual financial commitments to Brussels.

“This will not really look like any other deal as it stands at the moment,” Mr Davis said, predicting “the most comprehensive trade deal ever”.

He also sought to reassure worries about fishing rights, saying that after the end of the transition period in 2021: “We will negotiate with our surrounding states so that we have access to their waters and theirs to ours, and markets and so on, but it will be under our control.”

Mr Rees-Mogg, meanwhile, is urging the UK to be prepared to walk out on talks and warning that rowing back on Brexit would be “the most almighty smash to the national psyche” akin to the Suez crisis, when Britain and France attempted to regain control of the Suez Canal from Egypt in 1956.

“It would be an admission of abject failure, a view of our politicians, of our leaders, of our establishment that we were not fit, that we were too craven, that we were too weak to be able to govern ourselves and that therefore we had to go crawling back to the mighty bastion of power that is Brussels,” he will say in a speech on Tuesday.

“As with the disaster of Suez it would end up being a national humiliation based on lies.”