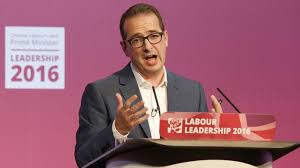 Owen Smith says he “stood by his principles” in calling for another EU referendum – a move which resulted in his sacking from Labour’s shadow cabinet.
The former shadow Northern Ireland secretary said Jeremy Corbyn had made a “mistake” in firing him.

He also said the party should “shift its position” on Brexit.

Mr Smith was asked to stand down on Friday after he wrote an article for the Guardian calling for a second vote.

Speaking about his sacking on BBC Radio 4’s Today programme, he said: “I think it is a mistake, for Jeremy Corbyn in particular, who has always understood the value of people standing by their principles.

“It is the position that he has often adopted, and it is certainly a value in him that others have extolled.”

“In truth I think that is all I have done. I have stood by my principles.”

Mr Smith said leaving the EU was “the biggest economic crisis that our country will have faced for many, many generations” and he believed Labour should stand against it.

Referring to Mr Corbyn’s views on Brexit as “a more Eurosceptic position”, he added: “It’s the first instance that I can think of in living memory of a government pursuing a policy that they know is going to make our economy smaller and reduce people’s livelihoods and life chances and I cannot understand why we in Labour would support that.”

The former Northern Ireland secretary said Mr Smith was widely respected for his work in the role.

Labour MP Chuka Umunna said it was “extraordinary” that the shadow minister had been sacked for advocating a Brexit policy which, he said, had wide support in the party.

Fellow MP Anna Turley said Mr Smith’s departure was “disappointing” and he would be a loss to the front bench, while former cabinet minister Ben Bradshaw told Mr Smith he was “very sorry” to see him go.