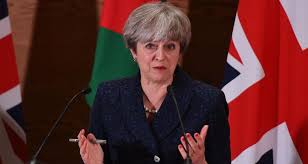 Jacob Rees-Mogg has secured a key reassurance from Prime Minister Theresa May that Britain will leave the customs union and single market – but Mrs May added a clarification on the status of the European Court of Justice following 2020 that may concern Brexiteers.

Brexiteer MP Jacob Rees-Mogg challenged the Prime Minister on the loss “of many of the red lines” that the Government had at the beginning of the Brexit talks.

The House of Commons session had been discussing the European Council meeting last week, where Britain secured a shock transition deal with the EU.

However, much to the fury of Brexiteers like Mr Rees-Mogg, the deal forces Britain to stay inside key EU institutions like the Common Fisheries Policy until the end of 2020.

This prompted the Brexiteer MP to demand this afternoon that Theresa May pledge to restore these red lines on British sovereignty once Britain leaves the transition deal and completes Brexit.

Mr Rees-Mogg said: “Many of us are concerned that in the transition many of the red lines have gone.

“But we can live with it on the basis that they are restored when we finally leave the EU.

“What reassurances can my right honourable friend give me that when we leave we will be out of the single market, out of the customs union, and out of any jurisdiction of the European Court of Justice?”

“We will be taking back control of laws. But, with his attention to detail, my honourable friend will know that within the December joint report, in relation to citizens right, for a period of time, for those EU citizens who are here, where cases are taken about those rights to UK court, it is possible for those UK courts to have due regard to the views of the ECJ.”

Mr Rees-Mogg was seen nodding during the Prime Minister’s response, which secured a promise to leave several key EU institutions.

However, the continued role of the ECJ within the UK after the Brexit transition ends remains a contentious topic for many Brexiteers.

The MP for North East Somerset had previously compared the transition deal to the “national embarrassment of Suez crisis”.

He condemned the fact that “free movement, the European Court of Justice, new laws, large amounts of money, and even our fishing waters are all in the transition deal”.