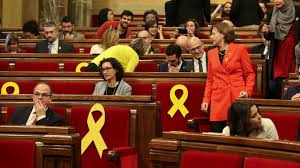 Separatists back resolutions defending “political rights” of politicians in custody or self-imposed exile.

The Catalan parliament has approved on Wednesday morning two resolutions put forward by separatist parties to defend “the political rights” of politicians who are in pre-trial custody or “in exile.”

The resolutions were backed by the three separatist parties in the regional chamber – Together for Catalonia (JxCat), Catalan Republican Left (ERC) and Popular Unity Candidacy (CUP) – who have 68 votes, exactly as many as are required for passage in the 135-seat assembly.

Marta Madrenas from JxCat told the chamber: “We don’t want there to be political prisoners and political refugees.”

“Nobody can expel our democratically-elected ministers for what they defend … We demand you respect the results of the December 21 election,” she added.

Sacked premier Carles Puigdemont fled Spain shortly after the unilateral independence declaration of late October to avoid being caught up in a criminal investigation into rebellion, sedition and misuse of public funds. He settled down in Belgium and attempted to get remotely reinstated following the snap elections of December 21, called by Madrid after the central government temporarily suspended Catalonia’s home rule. On Sunday, Puigdemont was arrested by German police as he travelled from Finland to Belgium, and placed in custody pending a decision to extradite him to Spain.

Parliamentary rules say that candidates to Catalonia’s highest office must be physically present at the investiture debate, voiding the possibility of an appointment by proxy. This requirement also affected the next two candidates who stepped up, grassroots activist Jordi Sànchez and former government speaker Jordi Turull, who are also caught up in the rebellion probe and currently in pre-trial detention.

Following Puigdemont’s arrest in Germany, separatist parties agreed to hold a special session today to ask parliament to “adopt all necessary measures to guarantee” that Puigdemont, Turull and Sànchez can “exercise their political rights,” including the right to be invested with office.

Other groups in the Catalan parliament are putting forward motions of their own for consideration by the assembly. The leftist Catalunya En Comú-Podem is proposing an effort to craft “broad majorities” to defend “the political rights” of Puigdemont and other separatist leaders affected by the rebellion probe.

Lawmakers will also be asked to vote on a document demanding the resignation of house speaker Roger Torrent. Ciudadanos, the party that earned the most votes at the December election, said that Torrent is not acting as a neutral speaker but instead “conducting ERC rallies” inside parliament and “acting as Puigdemont’s lawyer.”

And the Catalan Socialist Party (PSC) has filed a motion asking for greater dialogue among political groups to encourage “a process of national reconciliation.” Earlier this week, party leader Miquel Iceta talked about the need for a national unity government to overcome the political deadlock in Catalonia. If no new leader is found in under two months, Catalans will have to go to the polls again.