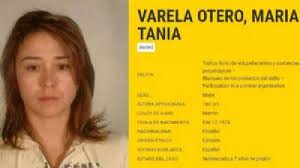 Europol’s most-wanted criminal on the run and the only woman in the organisation’s top 70 fugitives, Tania Varela, has been arested in Vilanova i la Geltrú (Barcelona province) after four years of hiding from justice.

Solicitor María Tania Varela Otero, 44, ex-girlfriend of David Pérez Lago whose stepfather was the infamous Galicia drug baron Laureano Oubiña, has been missing since 2014 after escaping a sentence for similar crimes herself.

She is accused of multi-million drug-smuggling hauls and of laundering the proceeds from her illicit trade.

Police say she played a ‘significant role’ in northern Spain’s biggest organised criminal gang, which used ports in the Galicia area to traffic cocaine and other class-A drugs from South America to Europe and included the notorious clans of Laureano Oubiña and Sito Miñanco

Tania Varela had three arrest warrants hanging over her – one each from 2013 and 2016, issued by the National Court, and one produced by the Court of First Instance number 2 in Cambados, Pontevedra province (Galicia) in 2014.

She had not run far, however: the fugitive was found to be living in Sitges (Barcelona province) with her daughter at the time she was caught.

Sra Varela, originally from Cambados in Galicia and a practising solicitor was sentenced in 2013 to seven years in prison for her part in a massive trafficking operation which police had uncovered in 2006 when they seized two tonnes of cocaine from a boat moored on A Barda beach in Corme (Pontevedra province), which turned out to be part of a six-tonne haul.

A further two tonnes disappeared when the crew on a second boat fled the coast, and the remainder sank out at sea.

Varela’s then boyfriend David Pérez Lago pleaded guilty during the trial in 2011, as did his partners in crime, leading to their sentences being reduced from 20 to nine years.

But Varela, who was suspected of having set up front companies in tax havens to launder the drug money, insisted she was innocent and appealed her sentence to the Supreme Court.

She had already been in custody pending trial, and the Supreme Court upheld the sentence during its appeal hearing in 2013.

At this point, Varela fled, and has been on the run since.

Before she was arrested, Tania Varela was office manager and legal advisor for the women’s issues department at Cambados town hall.