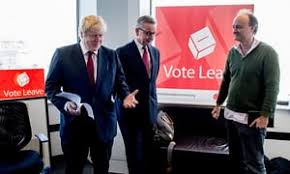 Mr Gove says he did not know about a £625k donation made by Vote Leave to the BeLeave group until after the referendum concluded.

Michael Gove has denied having any knowledge of an alleged breach of spending limits by the official Brexit campaign ahead of the EU referendum.

The Environment Secretary told Sky News he was unaware of a £625,000 donation made by Vote Leave to a youth Brexit group called BeLeave until after the 2016 referendum had concluded, despite being the co-convener of the campaign committee tasked with ensuring all pro-Leave groups were working together effectively.

Vote Leave has denied any wrongdoing over the payment, which whistleblower Shahmir Sanni claimed over the weekend had represented a breach of spending limits.

Mr Gove, who was a key figure in the Brexit campaign, said the case had already been investigated twice by the Electoral Commission and no wrongdoing had been uncovered.

Labour and the Liberal Democrats have called for the police to investigate claims by Mr Sanni that Vote Leave “cheated” in order to secure victory in the referendum.

But Foreign Secretary Boris Johnson, another prominent figure in the campaign, has branded the accusation as “utterly ludicrous”.

Cabinet colleagues Andrea Leadsom and David Davis have been less forthright, stressing it is up to the Electoral Commission to investigate the claims.

An Electoral Commission spokeswoman has said: “The commission has a number of investigations open in relation to campaigners at the EU referendum; it does not comment on live investigations.”