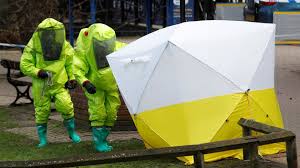 Three days after European Union leaders left a summit in Brussels with a discreet yet vague agreement to expel Russian diplomats over a nerve agent attack on British soil, envoys met back to share details before an afternoon deadline.

Unveiling national expulsion lists at a closed-door meeting on Monday, the 28 ambassadors from the EU’s member states were unaware of the scale of their plan to isolate Moscow: more than half the bloc’s governments had joined the West’s most sweeping expulsion of Russian diplomats since the Cold War.

“It wasn’t until the meeting that we saw the plans, that we could say we had agreed something meaningful, unprecedented,” one senior EU diplomat told Reuters, recounting events echoed by four other diplomats and officials.

Coupled with U.S. expulsions that were the result of days of intense diplomacy by Washington, London and later Paris, EU governments pulled off what seemed unthinkable a week before, and all in support of a country quitting the bloc in 2019.

But EU capitals wanted to demonstrate that, Brexit notwithstanding, security ties were paramount. “Russian interference is bigger than Brexit, it goes way beyond that,” a second EU diplomat said.

In total, more than 100 Russian diplomats are being removed from over 20 countries, including 15 members of the European Union, which has long been split on how best to handle Russia.

Moscow denies any involvement in the attempted murder of former Russian double agent Sergei Skripal and his daughter, who were found slumped on a public bench in the English city of Salisbury on March 4.

The show of EU support for Britain was all the more surprising because, in the weeks before the attack, the tone between London and Brussels had deteriorated as Britain sought new post-Brexit trade ties that the EU said were unworkable.

However, for the EU to unexpectedly come together, it still took a concerted British diplomatic effort with U.S. support.

From NATO via discussions with European Union foreign ministers to the EU’s two-day March 22-23 summit, the public focus was to be on a statement condemning Russia.

Behind the scenes, Prime Minister Theresa May had stronger demands: EU help in disrupting a Russian network of spies working under diplomatic cover in Europe.

Assistance first came from Baltic allies eager for Britain’s military protection against Russia, while U.S. officials had done groundwork by visiting some European capitals to sound out support for their plans to expel 60 Russian diplomats.

Crucially, before the EU summit got under way in the egg-shaped glass Europa building in Brussels’ European quarter, a regular meeting of the six Baltic and Nordic EU countries – Lithuania, Latvia, Estonia, Denmark, Sweden and Finland – opened up their forum to May.

There she made a plea for countries to consider the expulsion of Russian diplomats, sharing classified evidence on Russia’s involvement. Sweden and Finland, which maintain a traditional neutrality and are not NATO members like Denmark, signalled they might join the initiative.

Lithuanian President Dalia Grybauskaite went into the two-day EU summit on Thursday musing publicly that she could expel Russian diplomats. Privately, she had Poland’s agreement to join the move. Latvia, Estonia and France had also shown interest.

With the summit under way, May took her plea just before dinner to French President Emmanuel Macron and German Chancellor Angela Merkel. May had only one thing on her mind, a third diplomat said. “The evidence she presented Merkel and Macron was very strong.”

The meeting did not start well, however. The lights went out briefly in the British suite as news photographers crowded in for a brief photo call, with someone unknowingly leaning on the light switch and plunging the trio into darkness.

But after everyone else had left the room and the lights came back on, May won their agreement that something must be done about Russia, which NATO has accused of trying to undermine the West with a campaign of disinformation, cyber attacks and covert action such as the Skripal poisoning.

Merkel also agreed that London would not have to wait for the results of tests on samples of the Salisbury nerve toxin from the Organisation for the Prohibition of Chemical Weapons (OPCW) before Europe would act, mainly because Russia is a member of the watchdog and was seen as uncooperative in the inquiry.

Then, over scallops and rack of lamb on Thursday night, EU leaders discussed Russia for three-and-a-half hours, first attempting to agree a formal statement attributing blame for the toxin attack to Moscow.

With tough wording proposed by France and Ireland, that came around midnight and was a breakthrough, overcoming Greek resistance to criticism of Russia, and about as far as many diplomats had expected discussions to lead.

But May pressed on, sharing more intelligence that proved that “only one country could have done it”, she told the room.

Several leaders were looking around to see who else might join the expulsions when France’s Macron spoke up in support. Then Merkel, having received backing from her government coalition partner back in Berlin, joined too.

“That was the turning point,” a fourth diplomat said.