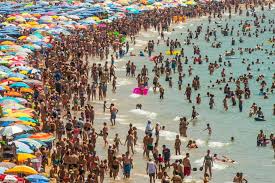 With a year to go until the UK leaves the European Union, BBC Scotland has been speaking to Scots pondering a future in Spain.

It’s easy to understand why so many Scots settle on the Costa Blanca, with its sandy beaches, all-day breakfasts and the promise of sunshine 300 days a year.

Spanish officials estimate there are more than 65,000 Britons registered as residents in the Alicante region.

And they may well be asking themselves: “Will Brexit change my plans for a life in the sun?”

Bicycle shop businessman Gary Routledge from Elgin has been living in Quesada for 10 years and is now in the process of applying for residency in Spain.

He voted to remain in the EU and he says that since the referendum his business has changed.

The bike shop owner – ‘The UK is losing out’

Gary Routledge, who is from Elgin and has been living in Quesada for 10 years, is applying for residency in Spain
“Since Brexit kicked in we have started to buy less bikes from the UK due to the fact that bikes have gone up in value – they charge us more for the same bike,” he explained.

“So the UK is losing out both from us and the wholesalers who we speak to.”

Registering with the Spanish authorities is also on the mind of restaurant worker Caroline Sim, who has been on the Costa Blanca for six years.

The former social worker from near Glasgow acknowledges the benefits: “It would make sense obviously to become resident because then it should safeguard you, your rights and everything like that within the country.”

The English teacher – ‘I worry for my business’

English language teacher Agnes Miller grew up in Edinburgh but has lived in Spain for more than three decades.

She didn’t get a vote in the referendum but campaigned with the Remain in Spain group before the UK went to the polls. She is concerned about what will happen to her language school post-Brexit.

Anges told the BBC: “My real and immediate concerns on my business about Brexit are that British teachers are going to lose their freedom of movement, so they are not going to be able to come here to work as quickly, as easily and as inexpensively as they can do now and that is going to impact a lot on my flexibility as a business.”

One Briton who knows what UK citizens are having to consider as the clock ticks closer to Brexit is Jack Troughton, a journalist working for English newspaper Costa Blanca News.

He believes people from Britain who settle in Spain are failing to realise the importance of committing to residency.

Jack says: “Brexit is something we have had to cover a lot, ever since the referendum.

“There are something like 300,000 officially registered [Britons], and there are probably something between that and 800,000 living here.”

‘People have tried to wing it’

He added: “One of the other problems is there are people called swallows who spend half their time in the UK and half the time here trying to chase the good weather.

“I think a lot of people have tried to wing it, they haven’t done their research.

“They are ready for Brexit in terms of they can read about it in newspapers, they can see it on TV, but in some respects they stick their heads in the sand and they don’t engage properly – and all of this bureaucracy, you have to get it right.”

How many Britons have Spanish residency?

The British Embassy is keen to get the message of residency across to ex-pats. It’s held 60 separate events in the region on the matter.

A spokeswoman said: “One of the main recommendations we give to British citizens in Spain is that they register with their local authorities, in the Padron.

“This is a requirement by the Spanish government, to keep a record of number of citizens living in towns.

“Also, municipalities get assigned services and resources depending on numbers of residents, so being a registered resident benefits both the resident and local authorities.”

Journalist at the Costa Blanca news, Jack Troughton, believes people have their head in the sands over Brexit

But Robert Kirkhope, who advises UK Citizens on settling in Spain, said it wasn’t because fewer Brits were moving.

Mr Kirkhope, originally from Edinburgh, said there was an initial lull following the Brexit vote, but business had now improved.

Further down the coast in Malaga, the Spanish Citizens Advice Bureau, has been inundated with requests for information on Brexit, with 30,000 people posting on their website since the referendum.

Myra Azzopardi, from CAB Spain, says the advice is to get registered. “People are very confused. Unfortunately they do not understand what’s going on.”

The tourist season is not yet fully under way on Costa Blanca.

However, many people believe as long as the sun keeps shining British citizens will continue to flock to these shores after Brexit.