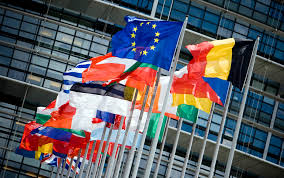 Brussels chiefs are plotting a £49 billion (€56 billion) raid on profits from the European Central Bank in a desperate bid to plug a huge blackhole in the EU’s finances left by Brexit.

The plan, due to be discussed by the European Commission today, is part of a raft of measures being considered to raise more money for the bloc’s coffers.

Under the proposals, reported by the Financial Times, eurozone central bank profits made from printing money would go straight into EU funds.

That could raise £49 billion (€56 billion) over the EU’s next seven-year budget.

The ECB has stressed that any such change would require alterations to its state.

A spokesman said: “Together with their own profits, the national central banks distribute it, according to national legislation, to their shareholders which are the finance ministries.

“The respective ministries and governments decide what they do with that money.”

EU member states are already split on how to meet bold new targets for infrastructure projects and increased security with less money once Britain goes.

Germany and France, the biggest EU economies, have said they could increase their contributions with certain conditions.

But a group of other wealthier member states led by the Dutch are opposed to having to chip in more.

The Netherlands, Denmark, Austria and Sweden – who are known was the “frugal four” – have refused to stump up any more cash to prop up the bloc in the wake of the UK’s departure.

The smaller and richer members make up the group of 10 countries who contribute more in budget funds than they receive in EU subsidies.

As Brussels chiefs count the cost of life without the UK, Jean-Claude Juncker ordered EU nations to fill the gaping £12bn Brexit sized hole by raising their contributions to 1 per cent of GDP.

But the smaller nations are determined to keep their contributions the same and want the EU’s next seven-year budget to remain the same.

Last month, Austria’s finance minister, Hartwig Loger, has said there is “no room for negotiation” when it comes to increasing budget contributions.

While Petteri Orpo, Finland’s finance minister, insisted the budget should be smaller after Brexit.

And Magdalena Andersson, Sweden’s finance minister, echoed his comments, saying: “It’s not a hole. Britain is not there any more, so we have to shrink the budget.”