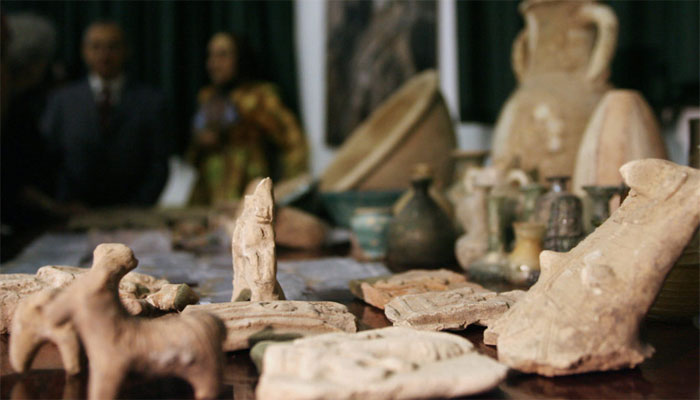 Two Spanish art experts suspected of running a ring that sold antiques looted from archaeological sites in Libya by groups linked to the Islamic State group have been arrested, police said Wednesday.

Officers seized “numerous works of art”, including seven mosaics and a sarcophagus, during raids carried out in five locations in Barcelona and the nearby town of Argentona as part of their operation, police said in a statement.

The works were stolen from archaeological sites in Libya’s eastern coastal region of Cyrenaica and northern region of Tripolitania, which are home to some of the finest Roman and Greek ruins in existence.

The two men who were arrested as part of the operation are both Spanish nationals aged 31 who are experts in ancient art.

Police said one of the men appeared regularly on TV to discuss ancient art and even took part in several academic conferences that discussed the destruction of historical sites by the Islamic State group.

“They led a network that illegally bought works looted from archaeological sites by groups linked to the terrorist group Daesh, helping to finance its activities,” police said in a statement, using the Arabic acronym for Islamic State.

“Some of the pieces also showed imperfections, bumps and marks that indicated they underwent a violent extraction from the subsoil, without the use of adequate archaeological techniques,” it added.

The two men are accused of selling the works, dubbed “blood antiques” on the black market according to Spanish police, at a gallery they run in Barcelona.

They face charges of membership in a criminal organisation, document falsification, smuggling and financing terrorism.

Spanish police said they sought the help of Libyan authorities to verify the authenticity of the works.