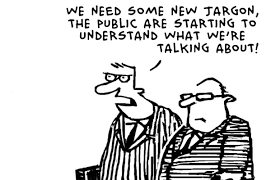 Confused by all the Brexit jargon in the news? Here’s a glossary to demystify commonly used EU-related terms.

Acquis communautaire: A French phrase meaning the entire body of European Union law. Countries have to incorporate it into their own law before joining the European Union.

Alignment: Keeping rules and regulations in the UK in line with those in the European Union after Brexit, as in “regulatory alignment”.

Article 50: The European Union’s exit clause. It is part of the Lisbon Treaty and by invoking it or triggering it a country formally and legally signals it is leaving the European Union.

Brexit bus: Refers to a bus hired by the Leave campaign in the run-up to the European Union referendum. On its side was a slogan that became one of the most controversial of the campaign and was credited by some with swinging the result: “We send the EU £350m a week. Let’s fund our NHS instead. Vote Leave.”

Brexiteers: Short for those who are in favour of Brexit. See also Brexiters.

Brexiters: Short for those who are in favour of Brexit. See also Brexiteers.

Brexodus: A combination of the words “Brexit” and “exodus” to mean the departure of people or companies from the UK because of Brexit. Whether this has happened, or will happen, is contested.

Cake and eat it: A phrase used to mean that Britain is trying to retain all the benefits of European Union membership without the obligations, including payments to the EU budget, accepting jurisdiction of the European Court of Justice and accepting the free of movement of people. European negotiators have frequently used “cake and eat it” to characterise Britain’s approach. See also “cherry picking”.

Canada model: Refers to a free-trade agreement between the EU and Canada which removes lots of barriers to trade between the two, but not as many as the Norway model – which involves signing up to more EU rules, contributing to the EU budget and allowing the free movement of people.

Cherry picking: A phrase used to mean the UK is trying to choose which European Union arrangements it wants to stay associated with and which it wants to fully opt out of. Similar to “cake and eat it”.

Cliff edge: The prospect of the UK crashing out of the European Union with no deal at all. That would mean having no agreement on the terms of Britain’s withdrawal or future trade relations, and could lead to serious disruption to businesses and individuals in Britain and across the EU.

Common Agricultural Policy: The EU policy designed to provide financial support to farmers through a system of payments. It was created to make sure that farmers in the EU produced enough food and also had a fair standard of living. Critics say it is wasteful and favours rich landowners and big agri-businesses.

Council of Ministers: A European Union body that represents member states’ national governments. It is made up of government ministers from all member states who meet regularly. Together with the European Parliament, the council has the power to make EU laws and decide the budget.

Customs union: A trade agreement under which two or more countries decide not to have taxes on imports (tariffs) of goods from countries in the union. Countries also decide to set a common tariff on goods entering from outside the union. The EU customs union includes EU member states and some small non-EU members and forbids members from negotiating trade agreements separately from the EU.

DExEU: The Department for Exiting the European Union: the name of the new UK government department responsible for managing the UK’s departure from the EU.

Divergence: Allowing rules and regulations to differ between the European Union and the UK after Brexit.

Divorce bill: The money the UK has in principle agreed to pay the European Union as part of the deal on Britain’s departure. It includes the UK’s share of the EU’s unpaid bills, contributions to the EU budget for 2019 and 2020, pensions for EU officials and a long list of smaller items. The independent Office for Budget Responsibility has estimated the cost of the financial settlement at £37 billion.

EU: European Union: the political and economic union of 28 member states, which the UK is planning to leave.

EU referendum: A national vote held on 23 June 2016 to decide whether the UK should leave or remain in the European Union. It was decided on a simple majority and the Leave campaign won by 52% to 48%.

EU Withdrawal Bill: Legislation passing through the UK Parliament that will repeal the European Communities Act, which took Britain into what was then the European Economic Community. It will also convert almost all EU law into UK law. Parliament will then be able to decide which EU laws it wants to keep and which it wants to get rid of. This bill is also sometimes known as the repeal bill.

European Court of Justice (ECJ): The ECJ is the EU’s highest legal authority and rules on disputes over European Union treaties and other EU laws. Its decisions are binding on EU institutions and member states.

European Economic Area (EEA): An area covering the 28 European Union countries plus Norway, Iceland and Liechtenstein, which enables those three countries to be part of the EU’s single market. They abide by the rules of the EU single market and its freedom of movement of people, goods, services and money.

European Free Trade Association (EFTA): An organisation made up of four countries: Iceland, Liechtenstein, Norway and Switzerland. They are allowed to trade freely with the single market in return for accepting its rules. They’re not in the EU customs union and can negotiate trade deals with third-party countries such as China.

European Parliament: The directly elected parliamentary institution of the European Union. It has 751 members and is elected by citizens in all 28 European Union member states.

Eurosceptic: An opponent of European Union integration, believing that it threatens the power of individual countries to determine their own destiny. Eurosceptics range from those who want far-reaching reform of the EU to those who reject the EU totally.

Euroscepticism: The belief that European Union integration threatens the power of individual countries to determine their own destiny. Eurosceptics range from those who want far-reaching reform of the EU to those who reject the EU totally.

Four freedoms: The free movement of goods, capital, services and people in the EU’s single market.

Free-trade agreement: An agreement between countries to reduce trade barriers, including import or export taxes (tariffs) and import quotas, in order to increase trade in goods and services.

Freedom of movement: One of the founding principles of the European Union. It means that citizens of EU member states and their families can live and work in any other member state. It is a major factor in public debate about Britain’s capacity to control immigration.

Frictionless trade: Trying to do business between the UK and the European Union with the minimum of tariffs, quotas, customs checks and other obstructions.

Globalisation: The process by which the world is becoming increasingly interconnected as a result of hugely increased trade, travel and other forms of interaction.

Hard Brexit: This phrase is often used by critics of Brexit who think it will harm the UK economy. A hard Brexit would be one where few of the existing ties between the UK and the EU were retained leading to more disruption than a Soft Brexit.

Henry VIII powers: Legal provisions for ministers to decide on changes to existing UK law without the normal process of scrutiny in Parliament. The term is named after King Henry VIII’s preference for creating laws by royal proclamation rather than through Parliament.

Irish border: The border between Northern Ireland and the Republic of Ireland. After Brexit, it will become the only land border between the UK and the European Union.

Mandate: The authority to carry out policy. In relation to Brexit it often refers to the referendum result giving a mandate to the government to take Britain out of the European Union.

MEP: Member of the European Parliament.

Norway model: An arrangement in which the UK would have to allow freedom of movement of people, make a contribution to the EU budget – smaller than it currently makes – and abide by the rulings of the European Court of Justice, in exchange for remaining in the single market.

Passporting: The arrangement under which British companies and foreign companies with bases in the UK are allowed to sell financial services across the European Union with no regulatory barriers.

Remoaners: A derogatory term meaning a person who complains about Britain leaving European Union and/or the outcome of the Brexit referendum.

Reste à liquider: A French accounting term meaning outstanding bills. In the context of Brexit it refers to projects the EU has agreed to support financially, but has yet to pay for.

Settled status: A legal status that will give European Union citizens and their families the right to stay in the UK and access benefits and public services after Brexit.

Single market: The way the European Union is treated as one territory with a free market in goods, money, services and people. The single market embraces 500 million consumers and includes EU member states and four other countries that have secured access but retain some optouts.

Soft Brexit: Leaving the European Union but staying as closely aligned to the EU as possible. It could keep the UK in the single market or the customs union or both. It could involve British compromises on free movement of people, allowing European Union citizens rights to settle in the UK with access to public services and benefits.

Tariff: A tax or duty to be paid on goods being imported or, very occasionally, exported.

Tariff-free trade: Trade without any taxes or duties to pay when goods are imported or exported.

Transition: The period between the UK leaving the European Union and the start of new arrangements for future trade. The UK calls it an “implementation phase”.

Treaty: A formally concluded and ratified agreement between states, either individually or collectively.

TTIP: Transatlantic Trade and Investment Partnership: a proposed trade agreement between the European Union and the United States. The deal was put on hold by the US shortly after the election of Donald Trump as US President.

World Trade Organization (WTO): A global organisation dealing with the rules of trade between states. If the UK were to leave the European Union with no new trading relationship agreed, UK trade with European Union member states would have to abide by WTO rules, significantly increasing the costs to business.