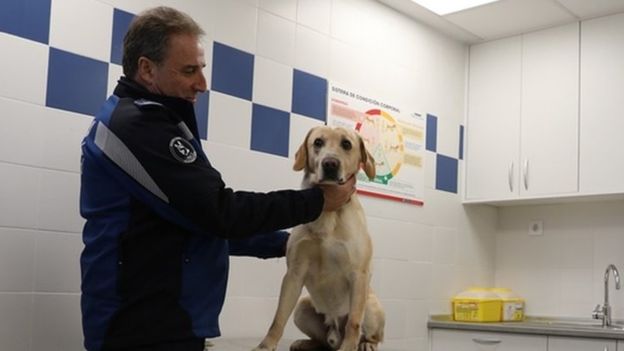 Madrid’s police dogs are to get air-conditioning and music therapy to improve their well-being.

It is hoped that the innovation will reduce the levels of stress experienced by the dogs.

The technique exposes the animals to classical music several times a day and is known as the “Mozart effect”.

The 22 dogs work as detectors in various roles in the municipal police force’s Canine Unit.

Madrid’s local council, which oversees the force, said that the dogs are exposed to high levels of stress in their roles.

The facilities have been installed as part of a refurbishment to the living quarters where the dogs are based.

Dogs in the unit are specialised in the detection of explosives and narcotics, as well as taking part in rescue missions.

A 2012 study published in the Journal of Veterinary Behaviour found that classical music can help reduce anxiety in dogs.

Rafael de la Gándara, a police sergeant in charge of the unit, said the refurbishment of the dogs’ quarters could help maintain their performance on the job.

He said the dogs needed to relax but also to be stimulated, to keep them alert and responsive to commands when undertaking the jobs that they can be summoned for at a moment’s notice.

“For example, when a dog is looking for drugs, it digs up the ground, which obviously wouldn’t be a good idea if it was looking for explosives,” Mr de la Gándara said.

The refurbishment also included air-conditioning to ensure that the dogs are protected from overheating in the summer and from the cold in the winter.