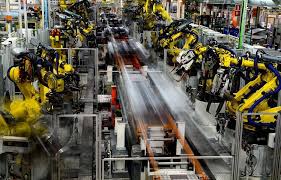 Markit’s Purchasing Managers’ Index (PMI) of manufacturing companies stood at 54.8 in March, down from 56.0 in February. The index has held above the 50 line separating growth from contraction every month since November 2013.

While the sector’s growth was less in March than a month earlier, the first quarter still marked a strong start to the year, IHS Associate Director Andrew Harker said.

“The slowdown in the rate of output growth led to one of the strongest increases in outstanding business ever recorded, suggesting that firms will have to expand production to work through this backlog in coming months,” Harker said.

The manufacturing output index slipped to 54.6 in March from 56.6 a month earlier, Markit said, the lowest reading since August.

– Detailed PMI data are only available under licence from IHS Markit and customers need to apply for a licence.