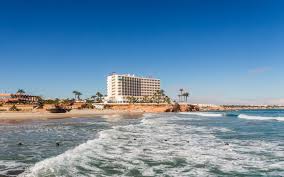 The youngster suffered cardiac arrest after colliding with another child at Cala Bosque beach on the Costa Blanca.

A British boy has died in a freak accident which happened while he played football on a Spanish beach.

The nine-year-old is said to have suffered a cardiac arrest after colliding with another youngster during the kick-around on the sand.

Bystanders tried to revive him after he collapsed unconscious before police arrived to perform CPR on him, at Cala Bosque beach next to the popular residential area of La Zenia on the Costa Blanca.

Paramedics are said to have brought him back to life after nearly an hour without a pulse when they reached the scene, but he later died in hospital.

There were no lifeguards on duty because the service was suspended the day before, and locals have criticised the ambulance response time.

The unnamed youngster was rushed to hospital in the nearby resort of Torrevieja before being transferred by air ambulance to another hospital in Alicante in critical condition.

He died at Alicante General Hospital around 5pm on Wednesday – 24 hours after the freak accident – while he was in an induced coma.

The boy is believed to have been with his grandmother at the beach. He is thought to have lived in the area, although this has not been confirmed by officials.

Witnesses criticised the time the two ambulances that responded to Tuesday afternoon’s alert took to reach the scene.

Local reports said the first ambulance arrived 25 minutes after the alarm was sounded with a doctor it had picked up on the way from a nearby health centre – and a second, better-equipped ambulance with a defibrillator on board took nearly 40 minutes to arrive.

The delays have been attributed to the fact the ambulances covering the area were busy with other calls and the paramedics on the one that helped recover the youngster’s pulse had to travel from the town of Orihuela more than 20 miles away.

Town hall officials in Orihuela, which covers the area of La Zenia, confirmed the dead boy was British in a press release and admitted a local lifeguard service in operation over Easter had been suspended until peak season the day before the tragedy.

The statement said: “Orihuela Town Hall wishes to express its utmost condolences over the loss of the child, of British origin, as a result of a collision with another youngster.

“The incident occurred on Tuesday afternoon on Cala Bosque beach in La Zenia.

“Attempts were made to revive the boy before local police arrived on the scene 10 minutes after the incident with a Civil Guard patrol.

“Those attempts continued both after the police arrived and the two ambulances arrived, one a basic life service ambulance and the other an ambulance belonging to the Valencian Health Service.

“Health professionals managed to stabilise the youngster who was transferred to Quiron Hospital in Torrevieja before being taken by air ambulance to Alicante General Hospital.

“The incident happened during medium season and the coastal lifeguard and rescue service had ended after Easter on April 2.

“We deeply regret the youngster’s loss and offer our condolences to his family.”