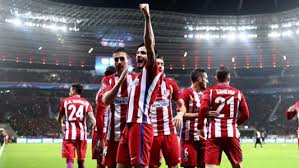 Sporting Lisbon make a trip to the Wanda Metropolitano for their showdown with Atletico Madrid in the first leg of the Europa League quarter-finals on Thursday night.

After settling for third place in the Champions League, knocked out of the Copa del Rey and nine points adrift of Barcelona in La Liga, clinching this title seems to be Atleti’s only realistic chance of getting their hands on silverware this season.

With this, NairaBet sees them as favourites at (1.35) to secure home advantage before the return leg in Portugal. They have a record of 12 wins in 14 competitive matches.

Sporting haven’t been in great form recently. They have lost three of their last six games in all competitions and thus enter this duel as huge underdogs at odds of (12.00).

All of the previous meetings between both sides has produced stalemates. Seeing another one here is priced at odds of (5.50) with the same betting firm.

Los Rojiblancos’ form at home is impressive as they’ve won 14 of their last 16 fixtures there, including the last eight on the bounce. During this time, they have kept a clean sheet 13 times, and the last goal they conceded on home soil came all the way back in January.

So, considering the hosts’ excellent defensive record, it’s worth backing them to win to nil available at odds of (1.75).

A strong bashing isn’t expected here as Jorge Jesus’ charges haven’t shipped in more than two goals on the road since October 2016, a run that goes back to 45 games. So, backing an outcome of two goals or less is chalked up at (1.85) with the same betting firm.

The first half has gone the way of Diego Simeone’s side in four of their last five matches in all competitions. Hence, it won’t be out of place seeing such repeat itself at (1.75).

Punters should back the men from Madrid to notch first as it has paid out in all of their last five competitive fixtures. NairaBet quotes (1.25) for this outcome.