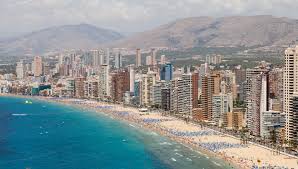 The trials were carried out at the Wednesday municipal market this week.

Benidorm’s Councillor for Security Lorenzo Martinez said that these devices “will be tested over the next couple of weeks, to gauge both the reaction of the public and to see how effective they are.”

The barriers can be moved around easily and also be adjusted and extended to take into account the width of the space needed to be cut off.  Unlike other ‘fixed’ barriers, these can be removed at a moment’s notice to give access to emergency vehicles.

The councillor went on to explain that other cities, such as Cordoba during the recent Holy Week, had already implemented this type of security barriers to cut off traffic during a number of processions.

According to tests carried out by the manufacturers, the barriers would stop any vehicle travelling at any speed between 40 and 70 kph.