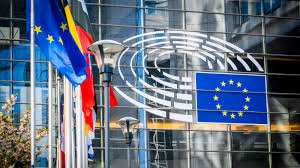 BREXIT has sent shivers down the spines of politicians and residents across the remaining EU27, with Europeans fearful for what might be around the corner as Britain leaves the European Union.

While the EU seems content with Britain’s exit, countries like Germany, Denmark and Spain are poised and waiting to see if the UK’s future relationship with Brussels will hurt their own economies.

With Britain’s attachment to the EU prolonged, member states will now have their chance to put their case for a Brexit trade deal forward to the European Commission, who are handling the negotiations.

Trade talks are expected help cracks emerge in the EU’s unity as each of the EU27 fight to protect their own interests, but who may be most worried about losing Britain as an EU member.

Denmark’s prime minister declared access to Britain’s North Sea waters a “high priority” during the next phase of Brexit talks.

Danish fishermen heavily rely on being able to net their catches off Scotland, as a result Lars Rasmussen has called for a “balanced deal” to maintain a level of access.

He said: “It is a priority for my country, of course. I think it’s like 30 to 40 percent of the total value in the Danish fisheries sector, which is caught on British waters. So this is, of course, a high priority.

“This is negotiation, we have to close a balanced deal.”

The UK’s Conservative Government took a personal blow after it handed control back of the UK’s waters to Brussels during the Brexit transitional phase.

Brexiteers and even Ruth Davidson, the leader of the Scottish Tories, branded the move a “complete betrayal” of the UK’s fishing communities, which may prompt Theresa May to think again about using Britain’s waters as a bargaining chip.

The Dutch face a similar threat to that of the Danish, with 40 percent of the economy linked to Dutch coastal towns being linked to fishing.

The coastal town of Urk is where 32 percent of the Netherlands’ fish is bought and sold, and its fishermen have demanded access to British waters to save their businesses.

Urk’s fishermen, like much of Europes, fear their sector may be pushed down the Brexit pecking order – especially with a vocal political lobby pushing Westminster to secure a good deal for British fishermen.

Geert Meun, of UK fishing industry organisation Visned, said: “We all know that fisheries is a small sector in the UK but it is an icon in Brexit.

“The UK want to have some success in Brexit – for example on fishing – we think that our fishing companies and our families will lose something in the final Brexit deal.

“We hope Mr Barnier reaches an agreement on fishing with the least impact possible and we ask him to please continue the current situation but we all know that isn’t going to happen.”

Madrid had hoped Brexit would be its government’s opportunity to snatch Gibraltar back from its position as a British overseas territory, but now could face being locked out after the Rock threatened to shut its borders to Spanish workers.

With Gibraltar sharing a border with southern Spain, many workers travel to the Rock daily for work, something that could change after Brexit.

Gibraltar’s deputy chief minister Joseph Garcia responded to threats of a possible veto of the Rock’s inclusion from Madrid with his own fiery warning.

Dr Garcia said: “We welcome them in Gibraltar, but if transition and withdrawal is not going to apply to us – and it includes chapters specifically on workers’ rights and frontier workers and what have you – then we would be free to do whatever we like on those elements as well.”

Spanish nationals would be worst hit by the threat to potentially rescind the rights of EU nationals in Gibraltar.

Around 13,000 travel to the Rock on a daily basis to work in the regions wealthy financial services industry, jobs that aren’t available over the border in Spain.

Frankfurt may have boasted of making a grab for London’s financial services businesses with passporting rights still up in the air post-Brexit, but one German MEP has warned of a potentially disastrous impact on his homeland’s industrial sector.

Hans-Olaf Henkel admit while Frankfurt could benefit to the tune of thousands of jobs, the opposite could be the same across the country’s highly lucrative manufacturing plants.

He told Express.co.uk: “People in Frankfurt are celebrating thousands of additional jobs in the finance industry – they loudly celebrate those.

“But industries are quietly worrying about many more lost than those which are gained in Frankfurt.

“I would say there is a risk for many more jobs in German industry than are gained in the finance industry.”

Mr Henkel warned of a “tragedy of historical proportions” if Britain is not offered a suitable post-Brexit deal.

France’s automotive sector could also take a massive hit as a result of Brexit, especially if trade borders are thrown up between the Continent and UK.

The Hauts-de-France region in the north of the country hopes to retain its strong economic links with the UK, but not are optimistic and have stressed the “major concerns”.

Francois Decoster, a senior official from the region, said: “In the automotive sector, there are major concerns regarding future relations with the UK.

“Particularly on the part of car maker Toyota, which operates in the region.

The French port of Calais “could be 10-times worse than the Irish border”, with its boss warning of 30-mile tailbacks.

Jean-Marc Puissesseau has pleaded with Theresa May and Michel Barnier to put in place plans to avert congestion in Calais and Dover.

He said: “I know Ireland is going to be a real problem, but please remember the economic issues in Ireland are 10 times smaller than we is going to happen here.

“This is a black scenario, but it is going to get darker and darker.”