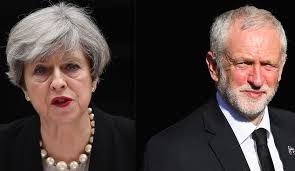 Britons overwhelmingly prefer Theresa May to Jeremy Corbyn in regards to conducting Brexit negotiations on their behalf, according to the latest YouGov Brexit poll.

Speaking to Bloomberg, YouGov Director of international projects Marcus Roberts said an overwhelming majority of the people surveyed in the last Brexit poll said they would not want Jeremy Corbyn to lead the negotiations.

He said that in response to the question “Who do you trust on Brexit?” Theresa May received 34 per cent of the votes while Jeremy Corbyn only received 14 per cent approval.

The statistical expert also said that the poll revealed that despite criticism of the UK Government on their approach to the NHS crisis and of the division within the cabinet, Britons would still favour Conservatives over Labour in the next general election.

According to a recent poll conducted by BMG the majority of Britons also support the Government taking back control of our borders, laws, money and trade from the EU.

The poll reveals that British voters now overwhelmingly support respecting the decision to leave the EU.

Brits were asked whether they agreed or disagreed with the following statement: ”The Government should get on with implementing the result of the referendum to take Britain out of the EU and in doing so take back control of our borders, laws, money and trade.”

Of Britons polled 57 per cent agreed, whilst only 22 per cent disagreed.

Those who agree outweigh those who disagree across all age groups, regions of the country and political party support.

Gender did not make a difference, as both males and females supporting Brexit with 55 percent of men and 59 percent of women agreeing.

BMG conducted the poll and interviewed a representative sample of 1,815 adults living in Great Britain between 13 and 16 March.

Support for political parties is based on voting intention for the next general election.