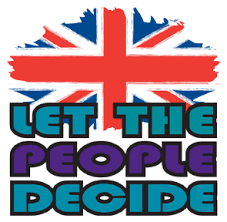 Support is growing for a fresh referendum on the final Brexit deal, according to a new poll showing the public back the idea for the first time.

The survey found that 44 per cent of people want a vote on the exit terms secured by Theresa May, amid continued uncertainty over the withdrawal agreement.

That is a clear eight points ahead of the 36 per cent who reject a further referendum, the research conducted for the anti-Brexit Best for Britain group showed.

The group pointed to evidence that “Brexit is sharpening the British public’s minds” and called for MPs to respond to the people’s growing desire for a “final say”.

The referendum would be held on the details of the deal the prime minister must strike by the autumn – on both the planned transition period and a “framework” for a permanent trade and security relationship.

Eloise Todd, Best for Britain’s chief executive, said voters should be allowed to choose between the details of the future on offer outside the EU, or staying inside the bloc.

“Now there is a decisive majority in favour of a final say for the people of our country on the terms of Brexit. This poll is a turning point moment,” she said.

“The only democratic way to finish this process is to make sure the people of this country – not MPs across Europe – have the final say, giving them an informed choice on the two options available to them: the deal the government brings back and our current terms.

“We now need MPs across parliament, from Corbyn’s front bench to the moderates of the Conservative Party, to do what’s best for Britain and back a people’s vote on the terms.”

The YouGov poll – of 813 people – also found a narrow lead to remain in the EU, should a further referendum be staged, of 44 per cent to 41 per cent.

In recent months, both Sir John Major and Tony Blair have backed another referendum, but only the Liberal Democrats and the Greens are currently in favour.

The only plausible scenario for it being called is if MPs reject the prime minister’s deal – plunging the country into turmoil and a constitutional crisis.

The negotiations are still bogged down on how to avoid a hard border in Ireland and the details of the final deal are unlikely to even be discussed until after exit day.

Ms May has insisted a defeat for her deal would see the UK crash out with no deal at all, but MPs who secured the “meaningful vote” have insisted the government would have to listen to parliament.

Some believe the humiliated prime minister would have to resign, forcing a Tory leadership contest and a delay to Brexit, which is supposed to take place on 29 March next year.

However, Labour remains opposed to a fresh referendum, while leaving the door open if circumstances change.

Best for Britain said its poll found that nearly a quarter of people who voted Leave in the 2016 referendum want a vote on the final terms.