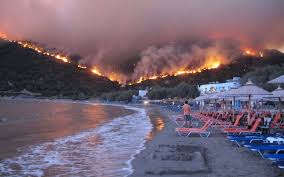 Aerial firefighters have just been given the chance to smother wildfires more effectively. Ahead of the prevention campaign this summer, legislation exempting air tankers from complying with standard rest periods has been tweaked, according to the Official State Bulletin (BOE). The amendment means they can now work up to three consecutive hours, as opposed to two, a welcome change in the wake of one of the worst years for forest fires since 2010.

According to the Official College of Pilots (COPAC), however, the amendment does not go far enough. “This is a partial and transitional measure,” says a spokesman for COPAC. “We believe a complete revision of the legislation is necessary. The current legislation is ambiguous, out of date and has little to do with the reality of aerial firefighting operations, either with regard to safety or putting out the fire. An adequate legislative framework with reference to activity and rest times is a fundamental safety measure for professionals who are carrying out a basic public service.”

In 2017, there were almost 800 forest fires in Spain, according to provisional data from the Ministry of Agriculture. During the summer alone, fire devoured almost 105,000 hectares of forest and fires in Doñana, Valencia, Galicia and Asturias, destroying the natural habitat of much of the local fauna.

COPAC has been complaining since 2014 about the two-hour rule, which applied to air tankers refilling from airfields, but not to those refilling from sources nearby.

“Statistically, most forest fires last for three hours and the first hours of tackling them are the most effective,” says the spokesman. “There have been cases in which the fire has had to be abandoned to comply with the legislation and has then taken longer to put out when work has resumed. When it comes to planes that can’t fill with water in reservoirs close to the fire, the journey to refill is not efficient to deal with a fire. Normally, the plane doesn’t work for more than 40 or 50 minutes on the fire in the two hours stipulated by the legislation.”

The amendment to the rule should lead to a more effective response to wildfires across the country and consequently less devastation.