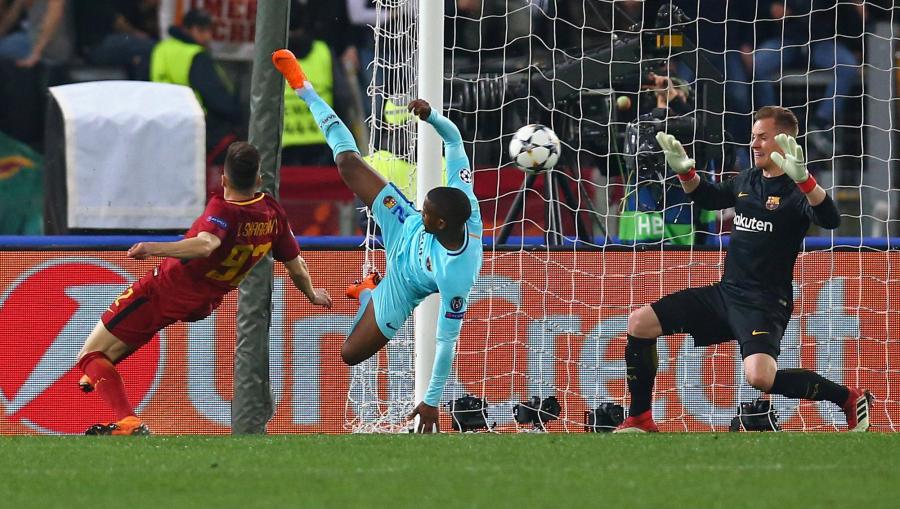 AS Roma pulled off one of the all-time Champions League shocks as they beat Barcelona 3-0 in Rome to reach the semi-finals on away goals.

With Barca 4-1 ahead on aggregate after a comfortable Camp Nou victory in the first leg, Roma went all-out attack from the off at Stadio Olimpico.

Roma were all over Barcelona for the first half as the Spanish giants laboured both on and off the ball, and Edin Dzeko got the ball rolling with a neat poked finish after he ghosted onto a simple high through-ball just six minutes into the tie.

Patrik Schick wasted two presentable chances and Dzeko had a header saved as Roma went into search of a second goal before half-time, but Barca held on to a two-goal advantage over the tie heading into the interval.

But the Giallorossi picked up where they left off after the break, with Daniele De Rossi – whose ridiculous own goal opened the scoring for Barca in the first leg – scoring a penalty to put the hosts within one goal of reaching the semi-finals 58 minutes in.

De Rossi then passed up the chance to add his second of the night as he sent a free header wide with 21 minutes remaining.

Roma substitute Stephan El Shaarawy went close with a back-post volley which Marc Andre ter Stegen did well to paw away, but the Barca goalkeeper could do nothing as Kostas Manolas beat Nelson Semedo to a near-post corner to glance home a fine header with nine minutes left on the clock.

That goal parked scenes of wild jubilation at the Stadio Olimpico, and Roma held on to record an historic victory which sends them through to the final four with Liverpool.

Barcelona were on the front foot in the opening exchanges, with Sergi Roberto and Lionel Messi both having chances in the first four minutes.

But it was Roma who broke the deadlock after six minutes when De Rossi’s pin-point pass was met in the box by Dzeko, who got the ball under his spell with a brilliant first touch before prodding past Ter Stegen from six yards.

Barca had an opportunity to hit back less than two minutes later after Juan Jesus tripped the on-rushing Messi 25 yards from goal but the Argentina forward missed the target with the subsequent free-kick.

Roma had a spring in their step and were attacking in numbers as they looked for a quickfire second.

Dzeko cleared the bar with his long-range effort in the 25th minute, while it took a well-timed challenge from Gerard Pique to prevent Kolarov from getting a shot away in the box a minute later.

Barcelona looked rattled as Roma pressed with high intensity and threw everything at them when in possession.

Schick nodded Alessandro Florenzi’s searching cross wide from the middle of the area in the 28th minute, while Ter Stegen was forced to tip over Dzeko’s close-range header eight minutes later.

The visitors won another free-kick from shooting range in the 38th minute as Luis Suarez was brought down but once again Messi could not find the target from 25 yards.

Roma began the second half as they had finished the first – in complete control – and were awarded a penalty in the 56th minute when Pique fouled Dzeko in the area.

Captain De Rossi rifled the ball beyond Ter Stegen to double Roma’s advantage and the home side were not finished there.

Ter Stegen was called into action once again in the 68th minute to keep Nainggolan at bay before Messi sent his 20-yard shot straight at Alisson six minutes later.

And after substitute Stephan El Shaarawy had been denied by a last-ditch save by Ter Stegen at the back post in the 79th minute, Manolas nodded Cengiz Under’s cross past the German to make it 4-4 on aggregate with eight minutes left to play.