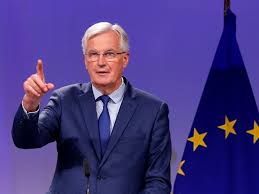 A ‘non-regression clause’ will be included in the agreement on the future relationship.

Britain will be made to sign a “non-regression clause” legally stopping it from lowering environmental standards after Brexit, the EU’s chief negotiator has said.

Speaking in Brussels on Tuesday, Michel Barnier said there needed to be a “level playing field” on environmental matters between Britain and the EU and that the UK should not be able to “gain competitive advantage” by ditching regulations once it had left.

He said that as a close neighbour, any increase in pollution from Britain could also affect neighbouring states like Ireland, Belgium, France, or the Netherlands – and that the environmental clause would have to go further than in other previous trade agreements.

The clause proposed by Mr Barnier would be included in the Brexit agreement on the future relationship between the UK and the EU – effectively making a trade deal conditional on it.

Michael Gove, the environment secretary, has said he wants a “Green Brexit”, but a document drawn up by Tory MEPs and leaked in February, however, judged it would be “impossible” to guarantee the UK sticks to the same standards as the EU.

Before he was appointed environment secretary, Mr Gove said last year that the EU’s Habitats Directive, and any other “regulations which hold any business here back”, could be amended or scrapped.

“I am not prejudging anything as to the UK’s future policies,” chief negotiator Mr Barnier told an audience at the European parliament.

“But let me be clear: these questions are not only economic or social, but also political.

“Why? Because the answers will be key to the ratification of any future deal by each national parliament, and obviously also by some regional parliaments, and by the European parliament.

“This can be inspired by the CETA or Japan FTA provisions, but this will need to go further. It should prevent any reduction of the key pre-Brexit standards. Of course, a strong level playing field requires effective oversight and enforcement of environmental rules.

“This is needed to ensure the confidence of citizens and companies in the fairness of the future arrangements with the UK.”

A coalition of 13 leading environmental organisations including Friends of the Earth, the WWF and the National Trust warned in January there was a “significant risk” that the UK’s environmental protections would be reduced after Brexit.

The group said that although Mr Gove had been “a highly engaged and effective environment secretary”, there appeared to be a “lack of willpower” to maintain high standards for environmental protection following Brexit.

British environment ministers were summoned to Brussels earlier this year to account for the UK’s high levels of air pollution, which are illegal under EU limits.