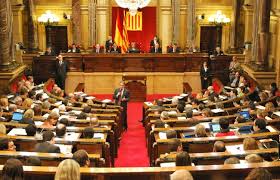 Catalan Parliamentary speaker Roger Torrent has announced that the investiture debate for the next Catalan President will take place on the 13th April.

Jordi Sànchez is the current nominee, however the process of inauguration has been held up due to the ongoing legal action over the regions contested declaration of independence.

Roger Torrent made the announcement yesterday, after the initial debate was cancelled. It’s understood Sánchez has made an appeal to the Supreme Court to be released from prison where he is currently being held on remand to attend the debate.