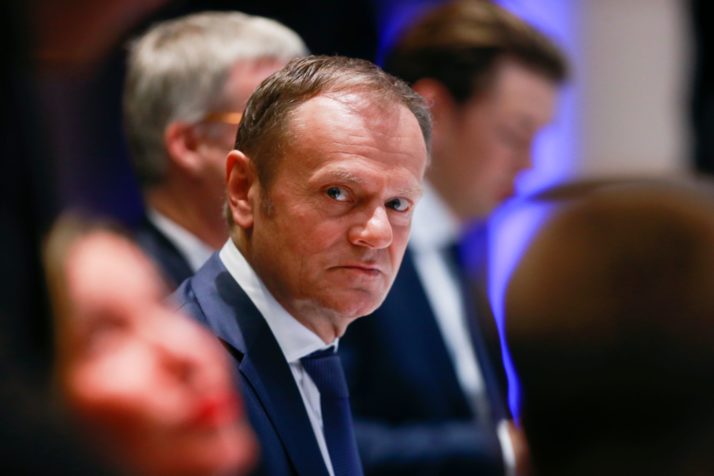 Donald Tusk on Tuesday called Britain’s departure from the EU “one of the saddest moments in 21st century European history” and said sometimes he was “furious about it.”

Speaking in Dublin, the European Council president lamented divisions that have torn at European nations, including conflict on the island of Ireland and the political bitterness that has enveloped his native Poland since the crash of a government plane in Smolensk, Russia that killed the country’s president and dozens of high-level officials.

“In my country, today marks the eighth anniversary of the plane crash in Smolensk,” Tusk said in a speech accepting a lifetime membership award from the University College Dublin Law Society in Ireland. “Shared national mourning quickly changed into a painful and particularly nasty argument that has divided my nation ever since.”

Citing risks that Brexit poses to the Good Friday peace accord between the Republic of Ireland and Northern Ireland, as well as conflicts in the Balkans and tensions with Turkey, Tusk told his Irish audience, “Our two countries don’t need reminding about how much effort, suffering and time is needed to build peace and unity without coercion, in the conditions of freedom. And how little time and effort is needed to undermine and demolish this structure.

“Wherever I look,” Tusk warned, “I can see this dangerous potential for conflict.”

Some of his darkest words were about Brexit.

Quoting James Joyce, Tusk said, “‘If Ireland is to become a new Ireland, she must first become European.’ I recall these words because they could as well be dedicated to all other European nations, especially now, in the times of Brexit, when European entropy is again starting to compete with European gravity.”

Listing many things he shares in common with the Irish, Tusk said, “Last but not least: I don’t like Brexit. Actually, that’s an understatement: I believe Brexit is one of the saddest moments in 21st-century European history. In fact, sometimes I am even furious about it.”

He also praised Ireland for opening its arms to immigrants. “You became a country of immigration for the first time, receiving more people proportionately than the U.K., yet no one ever hears of any problems on this issue from Ireland,” he said.

On a lighter note, Tusk described his love of football and rugby, of W.B. Yeats, Samuel Beckett, U2 and Sinéad O’Connor, and his warm memories of attending the Spain-Ireland match in his hometown of Gdańsk during the Euro 2012 football championship, despite Ireland’s loss. Praising the passion of Irish fans, he said, “I was there with them in Gdańsk at the time, not only in the stadium, but also in town after the match. Don’t ask me about the details, we had a few pints too many.”