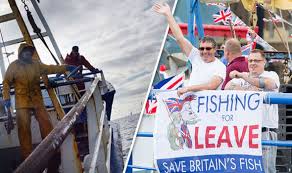 CONSERVATIVE MP Neil Parish called on the Government to fight for total control of UK fishing waters post-Brexit because British fishermen will not accept being “stitched up” a second time.

The Chairman of the Environment, Food and Rural Affair Committee claimed British fishermen were “stitched up” in 1972 when the UK joined the EU common market.

Mr Parish said it would be of utmost political importance to make sure the UK regained complete control of its waters post-Brexit.

He said: “I think politically we have to take back control of our waters.

“I was a member of the European Parliament for ten years and the one thing that fishermen in the south-west were particularly adamant about was that if anybody was stitched up when we went into the common market in 1972 it was fishermen.

“And they want their fish back and I think if we don’t deliver that politically, although perhaps it’s not a huge part of our economy, I think in the political sense it resonates with people.

“So I can see us getting that fish back because we will need to.

“But as we find with all of the negotiations this will take a little bit of time, but I think we must get that fishing back.”

Earlier in March, the UK struck a provisional deal with the EU on the terms of the transitional period starting from March 2019.

According to deal, there will be no change to the UK’s fisheries policy until after 2020, despite previous promises of immediate control next year.

On Monday fishermen in the coastal town of Whitstable, Kent, burned a boat to protest against the “treason” of the Brexit transition deal.

The protest was organised by the independent pro-Brexit lobby group Fishing for Leave, with more than 200 vessels joining in to unite against the deal.

Aaron Brown, founder of the group, explained that the transition period could do much more damage than just a loss of revenues in the next two years.

He told Express.co.uk: “The EU can do severe damage to us.

“Losing a couple of billion pounds during the transition period can have a knockout effect on our infrastructures, shops and suppliers, but is not just that.

“During those 21 months, the European Union could even implement a legislation aiming at crippling our fleets.

“Article 62.2 of the United Nations claims that what you can’t catch yourself goes to your neighbours, which means that if Britain doesn’t have enough boats anymore, the EU will keep getting our fish.”

British fishermen have long complained about the unfairness of the EU’s Common Fisheries Policy (CFP) which many blame for decimating the national industry.

“Theresa May has betrayed our fishermen. Brexit must mean Brexit.”

Fishing for Leave said the vote to leave the EU had provided a “golden opportunity” to “rejuvenate our coastal communities and industry”.