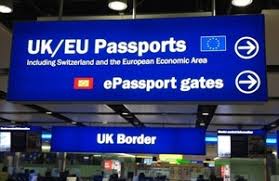 British and EU officials launched a fresh round of Brexit talks today amid fears that the UK could still crash out of the union without a trade deal.

The latest discussions in Brussels will attempt to address the lengthy list of issues which remain unresolved, with the UK officially leaving in less than 12 months.

EU nations are also drawing up contingency plans in case the trade talks, due to be completed in the autumn, end in failure.

Hundreds more customs officers are being recruited for ports in France and the Netherlands, causing concern over the risk of long delays for cross-Channel freight and holidaymakers.

Citizens’ rights and Britain paying a multi-billion-pound divorce bill are largely agreed. However there is still a split over a “backstop” solution for Northern Ireland, which would largely mean keeping the customs union and single market. Other issues still to be discussed include:

In Holland, Dutch customs is hiring hundreds of inspectors and building checkpoints in an effort to ready the Port of Rotterdam — Europe’s biggest — for the possibility of a cliff-edge Brexit in March 2019.

“Preparing for the worst, hoping for the best,” was how Mark Dijk, the port’s external affairs manager, described it to a cross-party group of EU parliamentarians last week.

“We go to the basic scenario for us, which is the WTO [World Trade Organization] scenario,” Mr Dijk added. “It’s dependent, of course, on how the Dutch customs is going to handle it — and that’s also of course dependent on Europe, how they’re going to decide how those regulations should be interpreted in this period.”

The Netherlands is one of Britain’s largest individual trading partners  for goods after the US, Germany, France and China. And the UK is Holland’s third most important trading partner.

Wopke Hoekstra, the Dutch finance minister, warned that the Netherlands faced a triple Brexit threat, with costs for Dutch companies, the public purse and customs.

Mr Dijk said perishable products imported to Rotterdam and shipped on to UK supermarkets would be worst hit in the short term, as the food retailers operated on a “just in time” basis, with a turnaround of less than 24 hours.

The UK Freight Transport Association estimates that two extra minutes checking each truck during peak hours could result in queues of almost 30 miles on each side of the border.